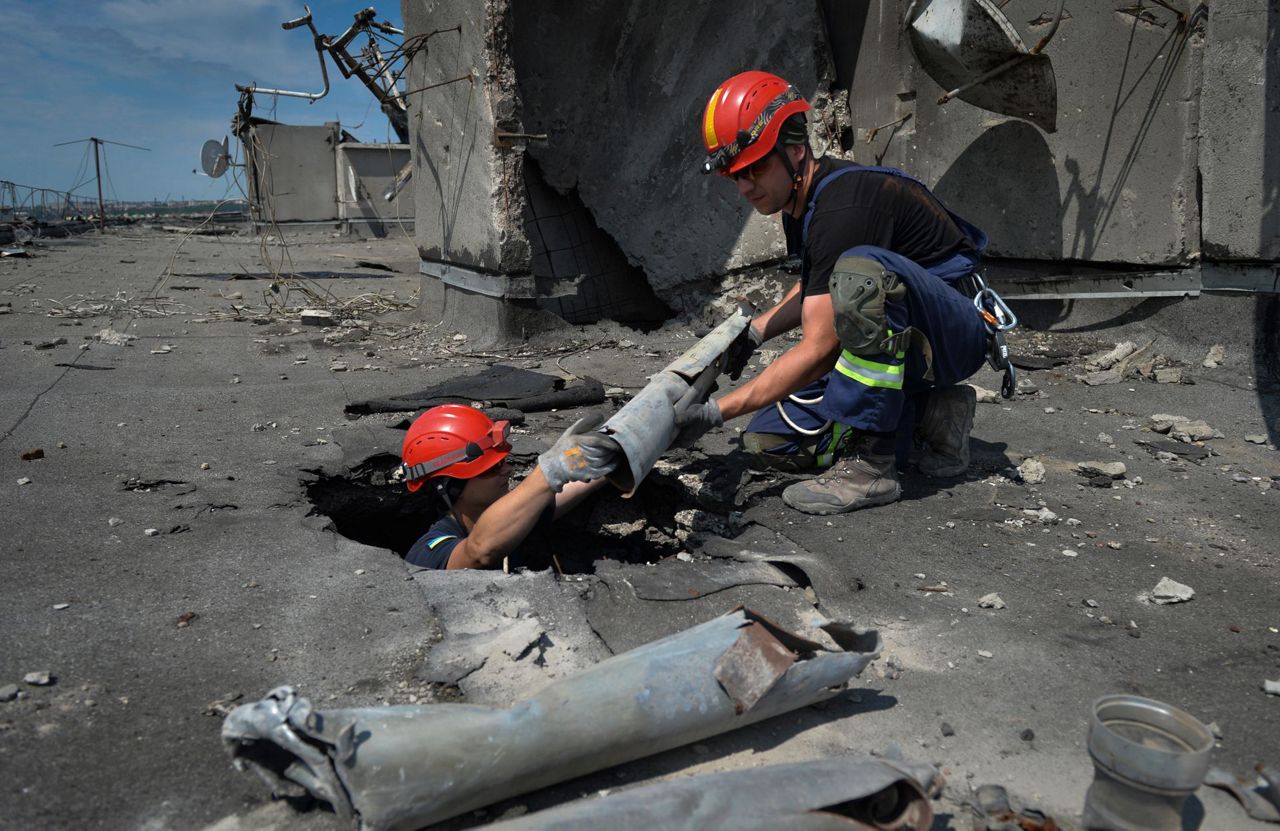 SLOVIANSK, Ukraine (AP) — Russian forces withdrew from a strategic Black Sea island Thursday, potentially easing the threat to the vital Ukrainian port city of Odesa, but kept up their push to encircle the last stronghold of resistance in the eastern province of Luhansk.

The Kremlin portrayed the pullout from Snake Island as a “goodwill gesture.” But Ukraine’s military claimed it forced the Russians to flee in two small speedboats following a barrage of Ukrainian artillery and missile strikes. The exact number of troops was not disclosed.

“Unable to withstand the impact of our artillery, missile and aviation units, the Russian occupiers have left Snake Island. The Odesa region is completely liberated,” the Ukrainian military said in its regular social media update Thursday evening.

A senior Ukrainian military official, Oleksiy Gromov, earlier said Kyiv was planning to deploy troops to Snake Island, but did not specify a timeline.

“At the moment, we control (the island) with the help of our weapons: long-range artillery, rocket units and aviation,” Gromov said.

Ukraine and the West have accused Russia of blockading Ukrainian ports to prevent exports of grain, contributing to a global food crisis. Russia has denied that and said Ukraine needs to remove mines from the Black Sea to allow safe navigation.

Turkey has sought to broker a deal to unblock grain exports. But the talks have dragged on, with Kyiv expressing fear that Russia will exploit the removal of the mines to attack Odesa.

Snake Island sits along a busy shipping lane. Russia took control of it in the opening days of the war in the apparent hope of using it as a staging ground for an assault on Odesa.

Ukrainian President Volodymyr Zelenskyy said that although the pullout did not guarantee the Black Sea region’s safety, it would “significantly limit” Russian activities there.

“Step by step, we will push (Russia) out of our sea, our land, our sky,” he said in his nightly address.

It was unclear if the evacuation of Snake Island meant a change in Moscow’s designs on Ukraine’s biggest port, which is crucial for shipping grain to Africa, the Middle East and other parts of the world. It’s also the headquarters of the country’s navy.

The island — shrouded in myth since ancient times — early on took on legendary significance for Ukraine’s resistance to the Russian invasion, when Ukrainian troops there reportedly received a demand from a Russian warship to surrender or be bombed. The answer supposedly came back, “Go (expletive) yourself.”

Ukraine has celebrated the story with patriotic fervor, issuing a postage stamp in commemoration.

The island’s Ukrainian defenders were captured by the Russians but later freed as part of a prisoner exchange. After the island was taken, the Ukrainian military heavily bombarded the small Russian garrison there and its air defenses.

At a NATO summit in Madrid, British Prime Minister Boris Johnson billed the Russian pullout as a sign that Ukraine will prevail in the war launched by Russian President Vladimir Putin. “In the end it will prove impossible for Putin to hold down a country that will not accept” occupation, Johnson said.

Meanwhile, Moscow kept up its push to take control of the entire Donbas region in eastern Ukraine. It is focused on the city of Lysychansk, the last remaining Ukrainian stronghold in Luhansk province.

Russian troops and their separatist allies control 95% of Luhansk and about half of Donetsk, the two provinces that make up the mostly Russian-speaking Donbas.

Ukraine said the Russians were shelling Lysychansk and clashing with Ukrainian defenders around an oil refinery on its edges.

The Ukrainian military said Thursday evening that Russia had seen “partial success” that day around the plant, some 17 kilometers south-west of the city. They made no reference to claims that attacking forces had been able to cross the strategic Siverskiy Donets river and enter the city from the north.

Zelenskyy said in his nightly address that the situation in the Donbas remained “the toughest and extremely difficult.”

Luhansk Gov. Serhiy Haidai said Russian reconnaissance units trying to enter Lysychansk on Wednesday were repelled. He said the Russians were trying to block a highway used to deliver supplies, and fully encircle the city.

“The Russians have thrown practically all their forces to seize the city,” Haidai said, but denied that Lysychansk had been encircled.

Nevertheless, Haidai noted that as of Thursday evening, evacuations from the city were impossible due to heavy shelling and mined access roads. Earlier, the Ukrainian military said it was not planning a retreat from Lysychansk.

A representative of Russia-backed separatists in Luhansk claimed that pro-Russian forces entered Lysychansk Thursday, after a perilous river crossing — which, if true, would be a significant development.

Military analysts previously told the AP that Russian forces had little chance of crossing the river without major losses due to the defenders’ elevated positions.

It was impossible to immediately verify the accuracy of the statements by Andrey Marochko, who heads the armed forces of the self-proclaimed, unrecognized separatist territory, to Russia’s Interfax agency. There was no official confirmation from Moscow or Kyiv.

—Ukraine’s president hailed the launch Thursday of Ukrainian electricity exports to E.U. member state Romania, which Zelenskyy called “only the first stage” of a process that may see “a significant part” of the Russian gas consumed by Europeans replaced by Ukrainian energy.

—- U.S. President Joe Biden said his administration will send an additional $800 million in security assistance to Ukraine, including rockets and advanced air defense systems. In his nightly address, Zelenskyy thanked Biden for the move, saying that the equipment soon “will go to the frontline to work for Ukraine, to defend freedom.”

— Indonesian President Joko Widodo, who held talks with Putin on Thursday a day after visiting Ukraine, said he handed the Russian leader a letter from Ukrainian President Volodymyr Zelenskyy. He did not elaborate.

— A senior Russian official warned that Moscow could consider Western sanctions as a cause for war. “Under certain circumstances, such hostile measures could be perceived … even as a casus belli,” Dmitry Medvedev, deputy secretary of Russia’s Security Council, said in a speech at a legal forum.

— Speaking on a visit to Turkmenistan on Thursday, Putin said his goals in Ukraine haven’t changed since the start of the war. He said they were “the liberation of the Donbas, the protection of these people and the creation of conditions that would guarantee the security of Russia itself.” He made no mention of his original stated goals to “demilitarize” and “de-Nazify” Ukraine. “As you can see, the troops are moving and reaching the marks that were set for them for a certain stage of this combat work. Everything is going according to plan,” Putin said.

— Funerals were scheduled Thursday for some of the 18 people confirmed killed in a Russian airstrike Monday on a busy shopping mall in the central city of Kremenchuk. Crews searched the rubble for 20 still missing.

— Sweden announced plans to send more military aid to Ukraine, including anti-tank weapons and mine-clearing equipment. Sweden was invited this week to join NATO, a process that could take months.

— Iranian state media said Thursday Iran has proposed expanding financial exchanges with Russia and cooperating in the energy field. Both countries are under heavy Western sanctions. Iranian President Ebrahim Raisi and Putin met on the sidelines of a summit in Turkmenistan.

Follow the AP’s coverage of the war at https://apnews.com/hub/russia-ukraine.

Copyright 2022 The Associated Press. All rights reserved. This material may not be published, broadcast, rewritten or redistributed without permission.