It was a not-the-Onion moment in an otherwise increasingly serious story for President Biden: Shortly after Biden’s lawyer Richard Sauber confirmed a set of classified documents had been discovered in the garage of Biden’s Wilmington, Delaware home, the President acknowledged the find—and revealed they had been locked up alongside his beloved Corvette.

The revelation came from Biden’s appearance at an event on the economy in the White House’s South Court Auditorium. Fox News’ White House correspondent Peter Doocy asked the president, “Classified materials next to your Corvette? What were you thinking?”

“My Corvette’s in a locked garage, OK? So it’s not like they’re sitting out on the street,” Biden responded. “People know I take classified documents and classified materials seriously.”

The internet reactions are already coming.

Seth Mandel, executive editor of the Washington Examiner Magazine, quickly tweeted, “Biden keeping classified docs with his Corvette is the most Biden thing ever, I can’t even be mad,” a nod to the president’s well known love of cars.

Biden keeping classified docs with his Corvette is the most Biden thing ever, I can’t even be mad. https://t.co/PLHumzwzNF pic.twitter.com/ambmQe4FKp

In the words of Taylor Swift, radio host Grace Curley jokes that Biden’s Corvette would also “very much like to be excluded from this narrative.”

The car in question is likely Biden’s 1967 Corvette Stingray, a classic green convertible featured in Jay Leno’s Garage show. The episode, released in fall of 2016, was only the third time Biden was able to drive it since his vice presidency began-– vice presidents aren’t allowed to drive during their term, except on rare occasions.

It was a wedding gift from his father Joe Biden Sr., a successful car salesman, according to Biden. Leno described it as “the only vehicle [Biden]’s ever loved.” 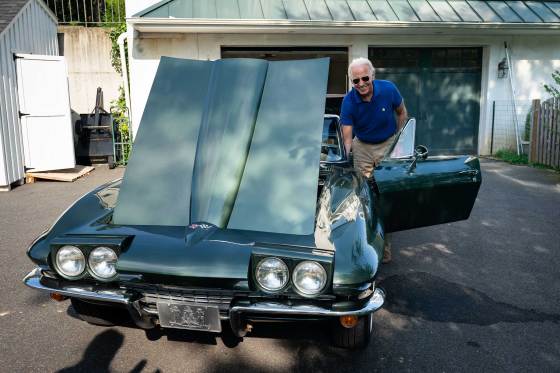 Adam Schultz—Biden for PresidentClassified documents were found as part of a personal library in the garage of President Joe Biden. Biden is pictured here with his Corvette Stingray in Wilmington, DE on July 16, 2020.

The classified documents were found as part of a personal library in the garage, and were Obama-Biden administration related records. No further details have been released on what the documents entail.

On Monday, the White House confirmed an initial batch of classified documents has been discovered at The Penn Biden Center, an office space of the 46th president. Sauber said in a statement that the White House would cooperate with the National Archives and the Department of Justice.

On Wednesday, Doocy, alongside other White House correspondents, had a tense exchange with White House Press Secretary Karine Jean-Pierre about the classified documents. “On these documents, how could anyone be that irresponsible?,” Doocy asks, reiterating a question Biden had in response to the boxes of classified documents found in former President Donald Trump’s Mar-a-lago resort last year.

Despite the differences between the two cases, the revelations about Biden’s classified documents have resulted in inevitable comparisons, especially from the right.