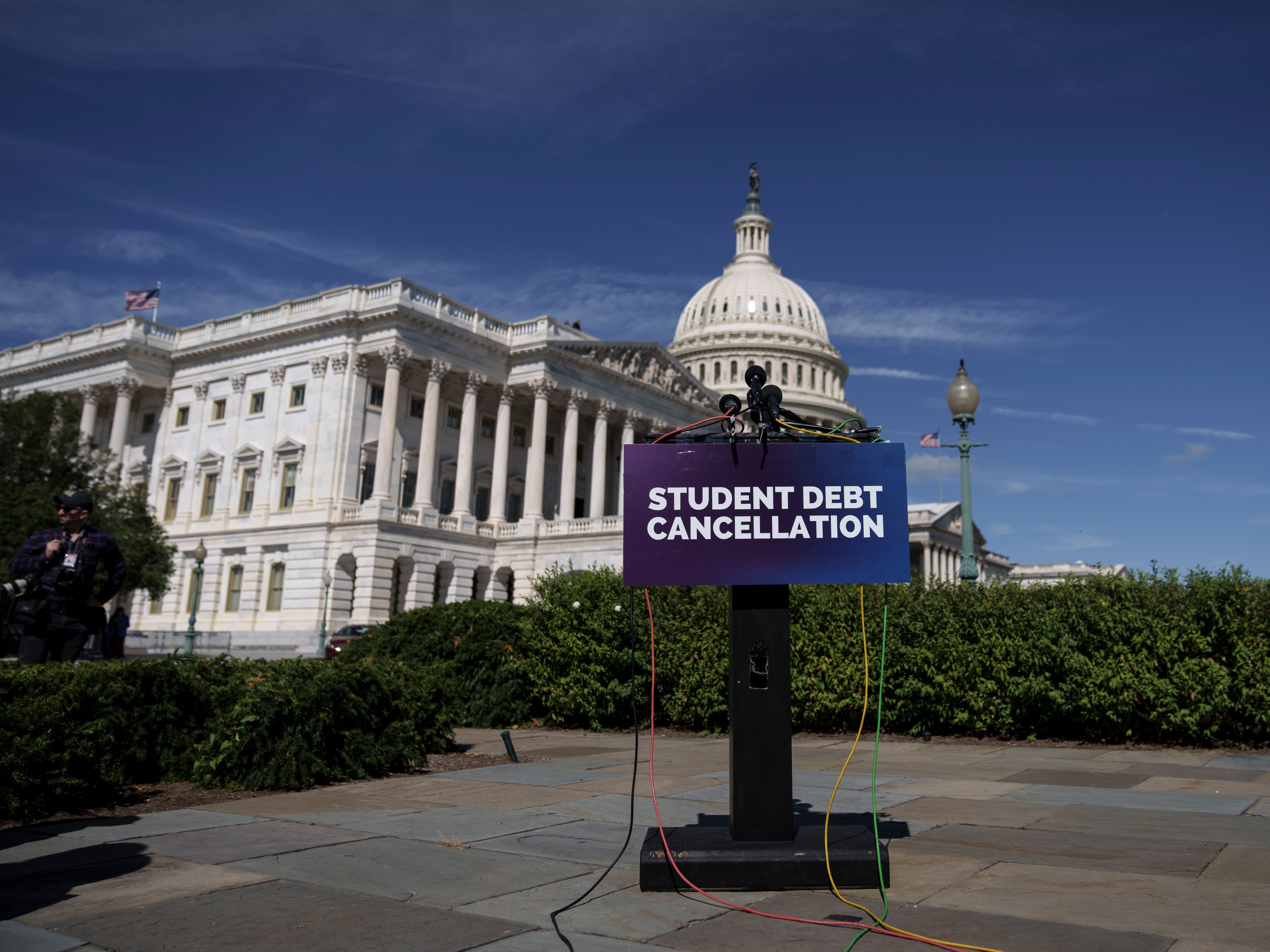 A view of the US Capitol before a news conference to discuss student-debt cancellation on September 29, 2022.

Biden’s plan to cancel up to $20,000 in student debt for federal borrowers is having its day at the Supreme Court on February 28 after two conservative-backed lawsuits have blocked the implementation of the relief. One lawsuit was filed by two student-loan borrowers who sued because they did not qualify for the full $20,000 amount of relief, and the other lawsuit was filed by six GOP-led states who claimed the relief would hurt their their states’ tax revenues, along with that of student-loan company MOHELA.

The latter case has particularly dominated criticism from those who support Biden’s debt relief because they have argued that MOHELA is its own entity, and the states’ cannot use it for its own legal defense. Many legal experts, advocates, and scholars even filed a series of amicus curiae briefs to the Supreme Court on Wednesday expressing support for Biden’s plan, and arguing against the validity of the two lawsuits.

But one of those briefs offered a unique perspective. Samuel L. Bray and William Baude, professors at the Notre Dame Law School and the University of Chicago Law School, respectively, filed a brief that stated that while they believe Biden’s plan to cancel student debt is illegal, they also don’t think the GOP-led states have standing to sue.

“The standing theories that have been thrown at the wall in these cases are wrong, and many of them would have dangerous implications,” the professors wrote.

“Not only did the states seek and obtain a national injunction—a remedy lacking any traditional basis in equity—but they obtained this exceedingly broad remedy with an unusually weak basis for standing,” they continued. “That combination is at odds with basic principles of standing and equity jurisprudence that are applicable in the federal courts.”

To demonstrate standing, the plaintiffs must prove that they would be injured by the policy, that the injury can be directly traced back to the defendant, and that the relief they’re seeking would address those injuries. Bray and Baude argued that the states simply don’t meet those requirements.

The states “utterly lack standing for the remedy they received”

Bray and Baude’s central argument is that Missouri should not be bringing this lawsuit. If MOHELA will suffer revenue loss from loans it would have serviced prior to debt relief, then MOHELA is the entity that should be suing, they said.

“MOHELA’s ability to sue and be sued means that it can vindicate its own injuries if it chooses,” the professors wrote. “To the extent that the loss of servicing fees is a cognizable injury, MOHELA is far and away the most interested plaintiff, and Missouri’s claim is entirely derivative. For whatever reason—whether politics or mission or something else—MOHELA has chosen not to do so, and the federal courts should be skeptical of another party’s attempt to force that interest into federal court.”

MOHELA even indicated in a November letter to Missouri Rep. Cori Bush that it was not involved in the states’ decision to bring the lawsuit, but the states still proceeded with the litigation.

Additionally, Bray and Baude said that the nationwide pause on the implementation of student-debt relief that the 8th Circuit Court of Appeals placed in response to lawsuit was the wrong decision, and the states “utterly lack standing for the remedy they received.”

In the earlier stages of the litigation, Biden’s administration requested that if the court decided to block the relief, it would not do so nationwide but limit it just to the states named in the lawsuit. It ended up placing a nationwide injunction on the relief, and the brief argued that the ruling should have been more consistent with the scope of standing in the case.

Dalié Jiménez, a law professor at University of California Irvine and director of the Student Loan Law Initiative, previously told Insider that the fact this lawsuit was taken up by a court in the first place is troubling — and she said that given the states’ lack of standing, a Supreme Court decision ruling in their favor could jeopardize legal decisions going forward.

“I think this is an important case,” Jiménez said. “I’m a little bit afraid of what is going to happen more for the larger implications on what the Supreme Court does, what its purpose is, and its role and legitimacy.