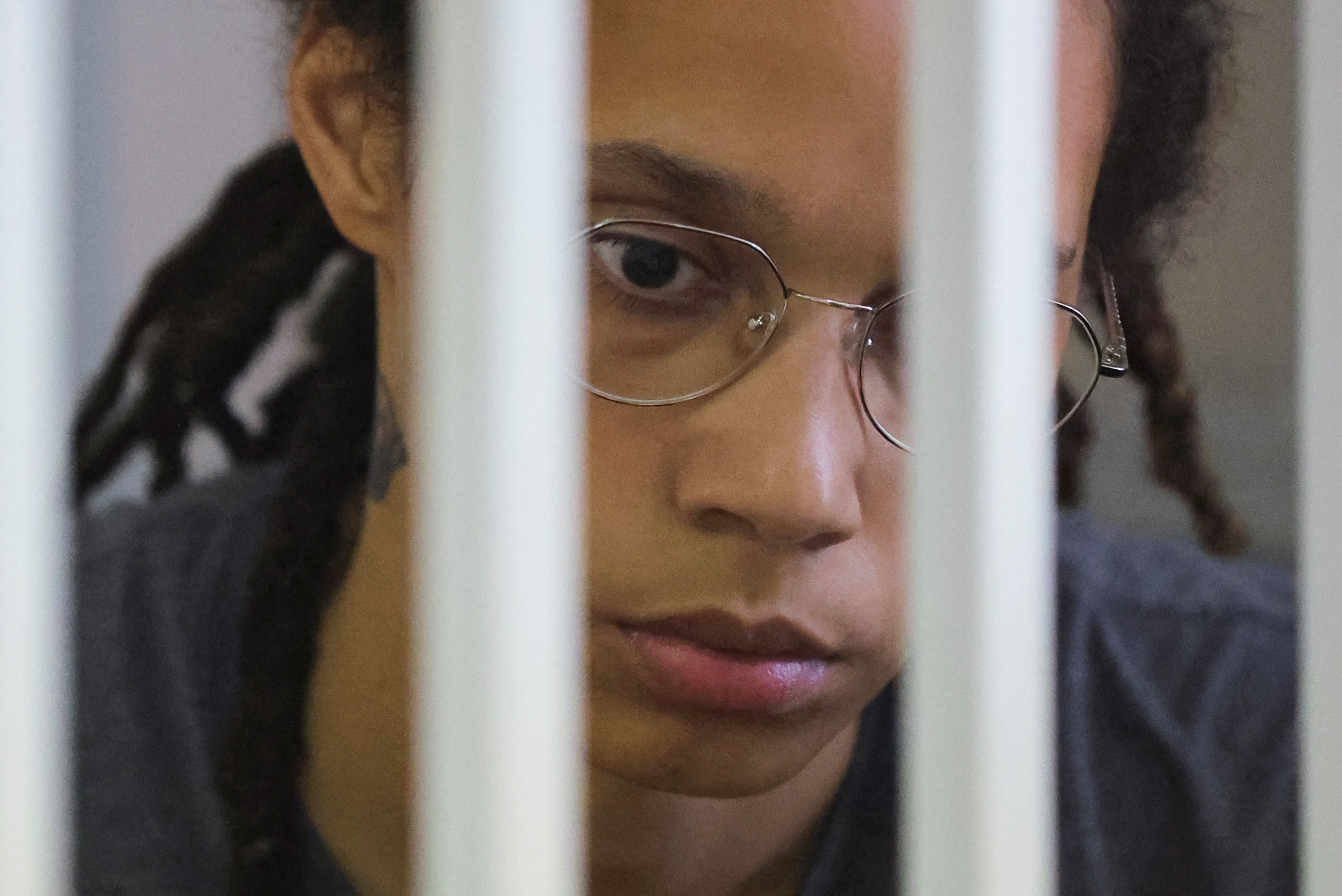 FILE PHOTO: U.S. basketball player Brittney Griner, who was detained at Moscow’s Sheremetyevo airport and later charged with illegal possession of cannabis, sits inside a defendants’ cage before the court’s verdict in Khimki outside Moscow, Russia August 4, 2022. REUTERS/Evgenia Novozhenina/Pool

U.S. basketball star Brittney Griner was released on Thursday in a prisoner swap with Russia after the two-time Olympic champion and player in the Women’s National Basketball Association (WNBA)spent more than nine months detained on a drug possession offense. Here are some of the key moments in her ordeal:

Feb. 17: Griner is taken into custody by Russian authorities after arriving at Moscow’s Sheremetyevo airport from New York. Russian Customs Service says she was detained after a scan of her luggage revealed vaping cartridges containing “liquid with hashish oil,” an offense that could carry a 10-year jail term.

March 23: The U.S. Embassy in Moscow makes contact with Griner. She is found to be in good condition, the U.S. State Department says.

May 3: WNBA says the home arenas of all 12 WNBA teams will stencil Griner’s initials and jersey number “42” on their basketball courts.

May 3: The U.S. State Department says it determined that Russia has wrongfully detained Griner.

May 17: U.S. Secretary of State Antony Blinken speaks with Griner’s wife, assuring her that securing Griner’s release is a top priority for the Biden administration.

July 1: Griner goes on trial in a court on the outskirts of Moscow to face drug charges.

July 6: Biden tells Griner’s wife in a call that he is working to secure the WNBA basketball star’s release from Russia as soon as possible, describing her detention on drug charges as “intolerable.”

July 7: Griner pleads guilty in a Russian court to drugs charges. She says she did not deliberately break the law. A week later, her lawyers tell the court that she was prescribed medical cannabis in the United States for a chronic injury.

July 27: Secretary of State Antony Blinken says United States has made “a substantial offer” to Russia to release U.S. citizens detained there, including Griner.

Aug 4: Griner is sentenced to nine years in prison, a ruling that President Joe Biden called “unacceptable.” A day later, Russia and the United States say they were ready to discuss a prisoner swap.

Nov 3: Officials from the U.S. Embassy in Moscow meet with Griner in the first visit with her in months.

Nov 9: Griner’s legal team says she has been transferred from a detention center outside Moscow and is on her way to a penal colony.

Nov 10: National security adviser Jake Sullivan says the United States has put forward “a series of proposals” to Russia for the release of Griner and former U.S. Marine Paul Whelan, but Moscow has not shown a willingness to engage in productive talks.

Nov 17: Griner’s lawyers say she has been transferred to a penal colony about 500 km (300 miles) southeast of Moscow.

Dec 8: The White House says Griner has been released in a prisoner swap with Russia and was now in U.S. custody. The swap took place at Abu Dhabi airport in the United Arab Emirates, Russian news agencies report.