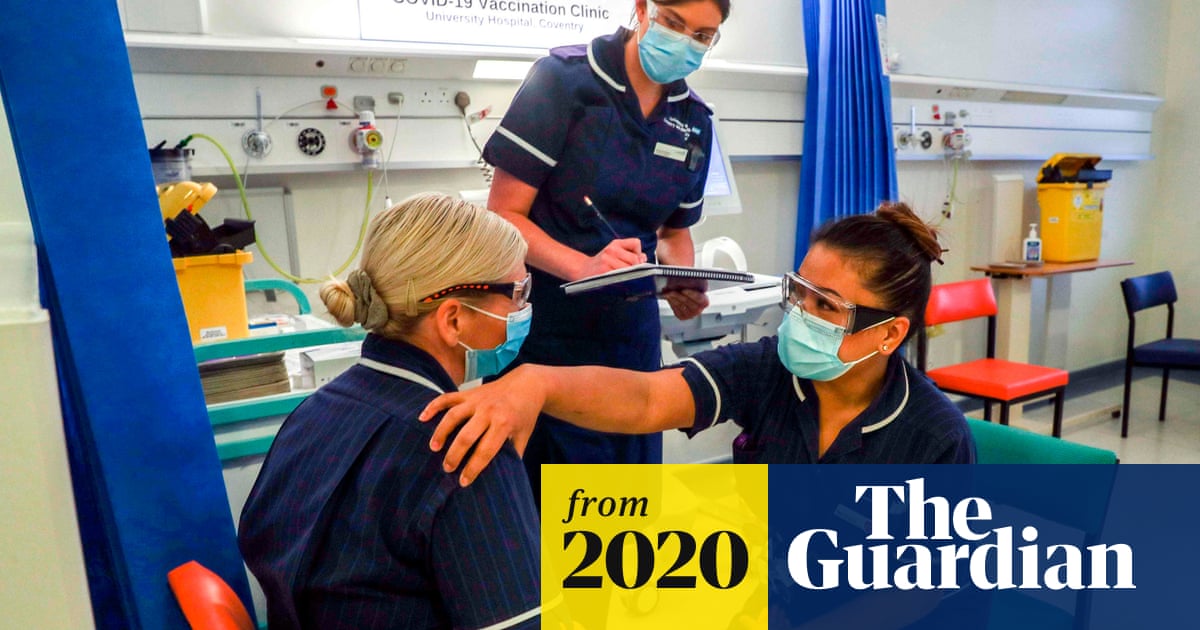 The coronavirus vaccine will have only a marginal impact on hospital admissions over the next three months with the festive season likely to put additional pressure on health services, the UK’s chief medical officers have warned.

In a letter to healthcare staff sent on Friday, the CMOs for England, Wales, Scotland and Northern Ireland said the effects of vaccination would likely be felt by spring but workers should brace themselves for an “especially hard” winter.

They wrote: “Although the very welcome news about vaccines means that we can look forward to 2021 with greater optimism, vaccine deployment will have only a marginal impact in reducing numbers coming into the health service with Covid over the next three months … The social mixing which occurs around Christmas may well put additional pressure on hospitals and general practice in the New Year and we need to be ready for that.”

The Medicines and Healthcare products Regulatory Agency (MHRA) approved the Pfizer/BioNTech vaccine on Wednesday, meaning the UK is the first country in the world to have an approved vaccine.

The vaccines are expected to be administered in England for the first time on Tuesday after they have been distributed to hospital hubs. Northern Ireland has also said it is on track to begin immunisations next week.

Hospitals will begin by immunising care home staff, and hospital inpatients and outpatients aged over 80. Care home residents, who are in the highest priority category, pose a more difficult logistical challenge. At one point NHS staff were mooted to be the first to receive the vaccine but the letter states: “All healthcare workers would agree that the principal aim of the initial vaccination programme should be to protect the most vulnerable and those at highest risk of mortality.”

Dr June Raine, chief executive of the MHRA, told BBC Radio Cumbria that getting vaccines into care homes might be “variable” but, “I would say definitely within the next two weeks”.

The letter also pointed out that while the vaccine can prevent disease symptoms, there is a lack of firm data as to their effects on transmission of the virus. “It is going to be essential that people continue to maintain current PPE (personal protective equipment) and other measures to reduce transmission even after vaccination as we accumulate that data,” they say.

Expressing admiration at the continued efforts of healthcare staff, the authors also encourage them to take part in trials, echoing Friday’s warning by Mike Ryan, the World Health Organization’s top emergency expert, that “vaccines do not equal zero Covid”.

“We do not expect Covid to disappear even once full vaccination has occurred although it will be substantially less important as a cause of mortality and morbidity. It is therefore absolutely essential that we use the next months to learn as much as we can as we expect Covid to be less common in the future,” they said.

“This will allow us to have the best chance of a strong evidence base for managing it over the coming years. We would therefore strongly encourage colleagues to continue to recruit or to participate in drug trials such as Recovery, vaccine trials, and observational studies such as Siren. We will all be very grateful for the results this will lead to in future years.”

The chief medical officers said that lockdowns and other restrictions had helped reduce the peak and that in most areas of the UK hospital numbers were likely to fall over the next few weeks. But they warned that this would not happen everywhere and that the relaxation of restrictions over Christmas could change the outlook.