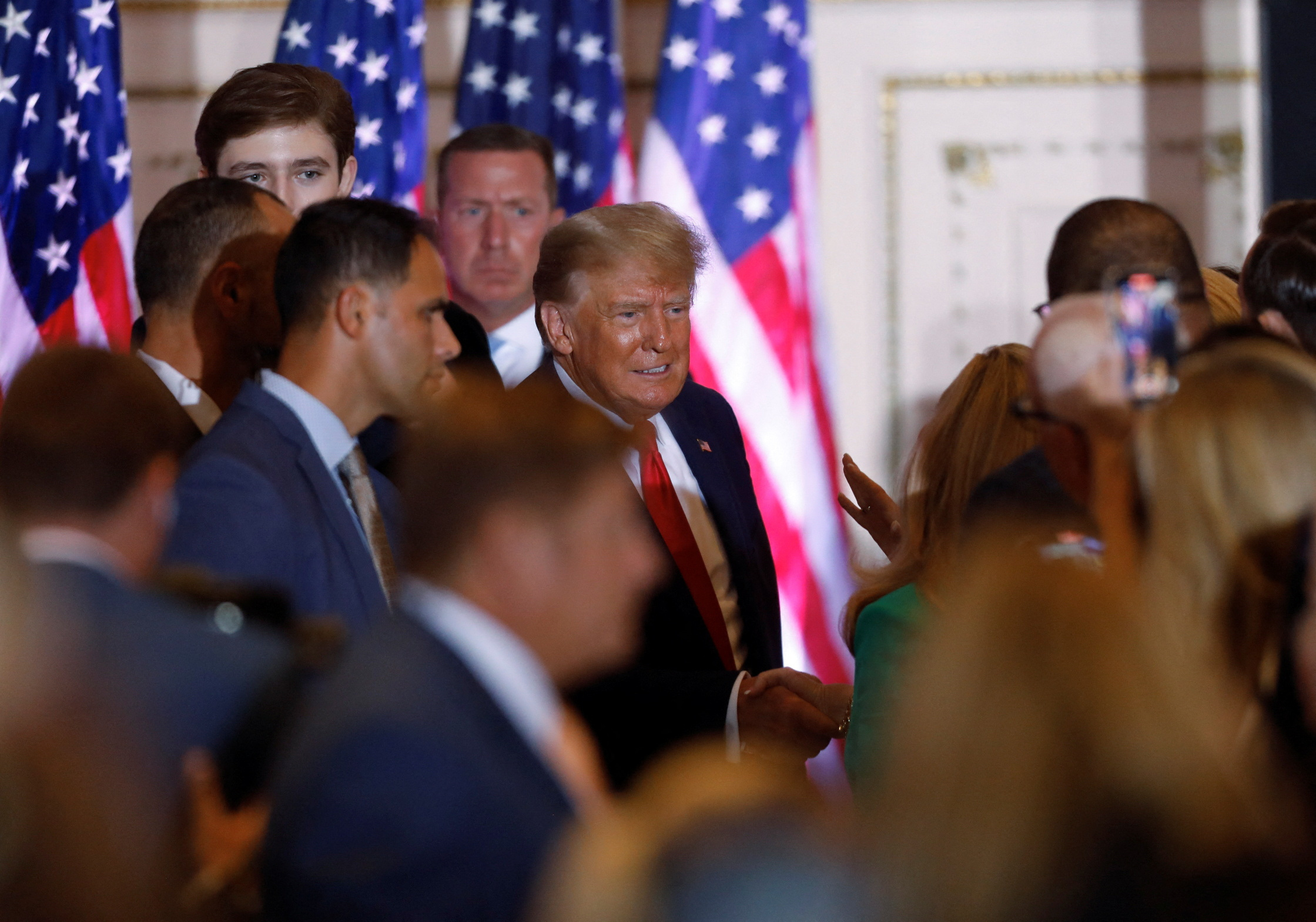 Former U.S. President Donald Trump shakes hands with attendees, after announcing that he will once again run for U.S. president in the 2024 U.S. presidential election during an event at his Mar-a-Lago estate in Palm Beach, Florida, U.S. November 15, 2022. REUTERS/Octavio Jones

Donald Trump’s 2024 bid for the U.S. presidency was broadcast live and welcomed on the Fox News “Hannity” show on Tuesday, even as others in Rupert Murdoch-controlled media oppose giving the former president another tilt at the White House.

But the news network cut away about halfway through Trump’s hour-long speech for analysis and commentary before returning to the live feed and more measured commentary, in contrast to past practice when Fox routinely broadcast entire speeches by Trump.

Host Sean Hannity returned to the live feed, which continued beyond his primetime hour and into Laura Ingraham’s “Ingraham Angle,” where both the host and her guests had a more measured response to the announcement.

Throughout Trump’s presidency Murdoch media were usually supportive, but they have been critical of the Republican former president since the party failed to deliver on their expectations of a “red wave” of victories in Nov. 8 midterm elections.

“The GOP and the country, would be best served if Mr. Trump ceded the field to the next generation of Republican leaders to compete for the nomination in 2024,” the Murdoch-controlled Wall Street Journal’s editorial board wrote on Monday.

“If Mr. Trump insists on running, then Republican voters will have to decide if they want to nominate the man most likely to produce a GOP loss.”

As the week’s vote tallies revealed Democrats would retain control of the Senate, and Republicans would capture a slender majority in the House, Fox News analysts looked for an explanation.

On Nov. 9 Ingraham said that for the GOP to win the 2024 election, the party must look for candidates who are focused on winning – not “settling a score.”

“The populist movement is about ideas. It is not about any one person,” Ingraham said. “If the voters conclude that you’re putting your own ego or your own grudges ahead of what’s good for the country, they’re going to look elsewhere. Period.”

“The downsides are marbled with the upsides, but in this case, he’s certainly not the single cause of anything,” Carlson said. “Whether you like Trump or not – and many don’t and a lot do – it’s a lot more complicated than just him.”

In the days leading up to Tuesday’s announcement, Murdoch’s newspapers took swings at Trump, blaming him in opinion columns and editorials for the Republican Party’s midterm election losses.

The New York Post tabloid’s cover depicted Trump as Humpty Dumpty, with the headline, “Don (who couldn’t build a wall) had a great fall – can all the GOP’s men put the party back together again?”

The Wall Street Journal echoed that sentiment, and on Nov. 9 published an editorial, “Trump Is the Republican Party’s Biggest Loser,” that noted the losses of Trump-backed candidates “in states that were clearly winnable,” including New Hampshire and Pennsylvania.

Fox News did not respond to a request seeking comment.