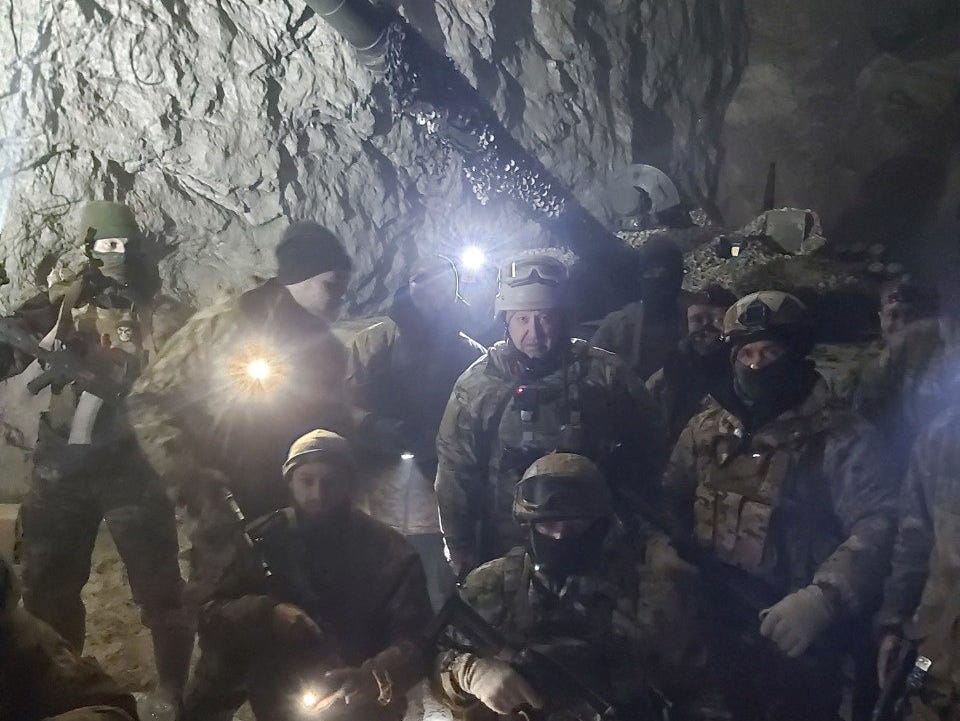 People in military uniform, claimed to be soldiers of Russian mercenary group Wagner and its head Yevgeny Prigozhin, pose for a picture believed to be in a salt mine in Soledar in the Donetsk region, Ukraine, in this picture released January 10, 2023.

In recent days the war in Ukraine has revolved around the salt-mining town of Soledar in the east of the country.

Russia claimed on Friday that it had seized the town. The founder of the paramilitary Wagner Group, Yevgeny Prigozhin, claimed earlier this week that his troops had achieved the rare victory without any involvement from Russia’s official military and pictures emerged of him and his troops inside the Soledar’s famous salt mines.

Russia’s defense ministry later credited the group with leading the attack after days of public sparring in a surprising concession.

Meanwhile, Kyiv has denied that Russia has taken full control of Soledar.

Officials in the US have speculated that Russia, particularly the Wagner Group, has aimed to capture the town to gain control of its valuable salt and gypsum resources for financial purposes.

Before the war the mined galleries of salt, had been convertor into a magical buried world.

Look inside the town’s vast salt mines, where Ukraine has previously hosted symphonies, soccer games, the inflation of a hot air balloon, and more. 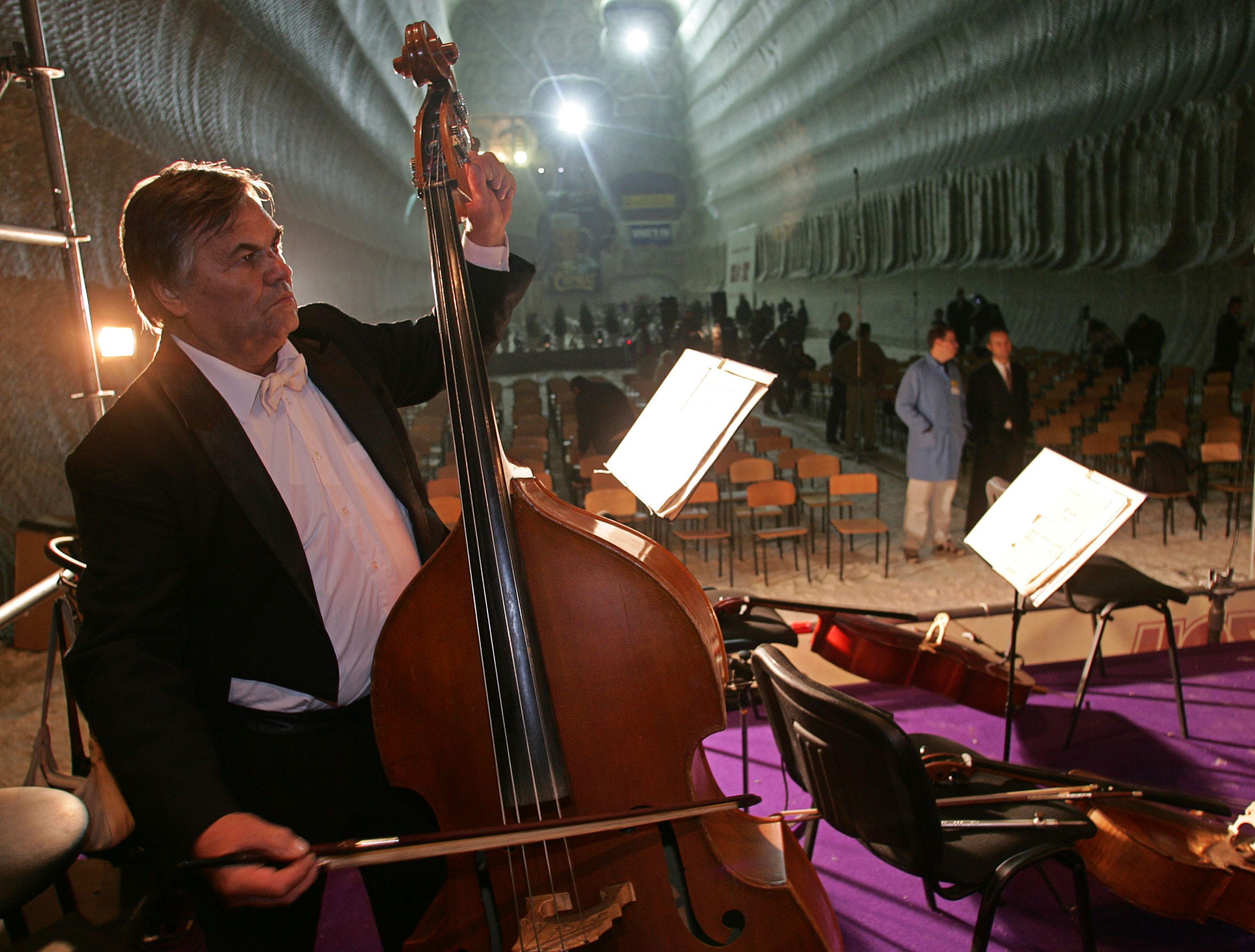 Symphony orchestra’s bass player tunes his instrument before a concert held in a 900-feet deep salt mine in the town of Soledar, 560 miles east of the capital Kyiv, October 2, 2004.

The vast salt mines are owned by state enterprise Artemsil, which was one the biggest producers of salt in Europe, but halted operations following Russia’s invasion in February.

It has produced more than 280 million tonnes of salt since mining began in the town in the late 19th century, according to Reuters.

The miles of vast galleries that the mining activity left have been converted into an “underground city,” according to tourist guides that predate the war.

The subterranean world included a concert hall, a soccer field, a church, a bar, and a health spa.

The salt mine reaches a depth of around 1,000 feet. 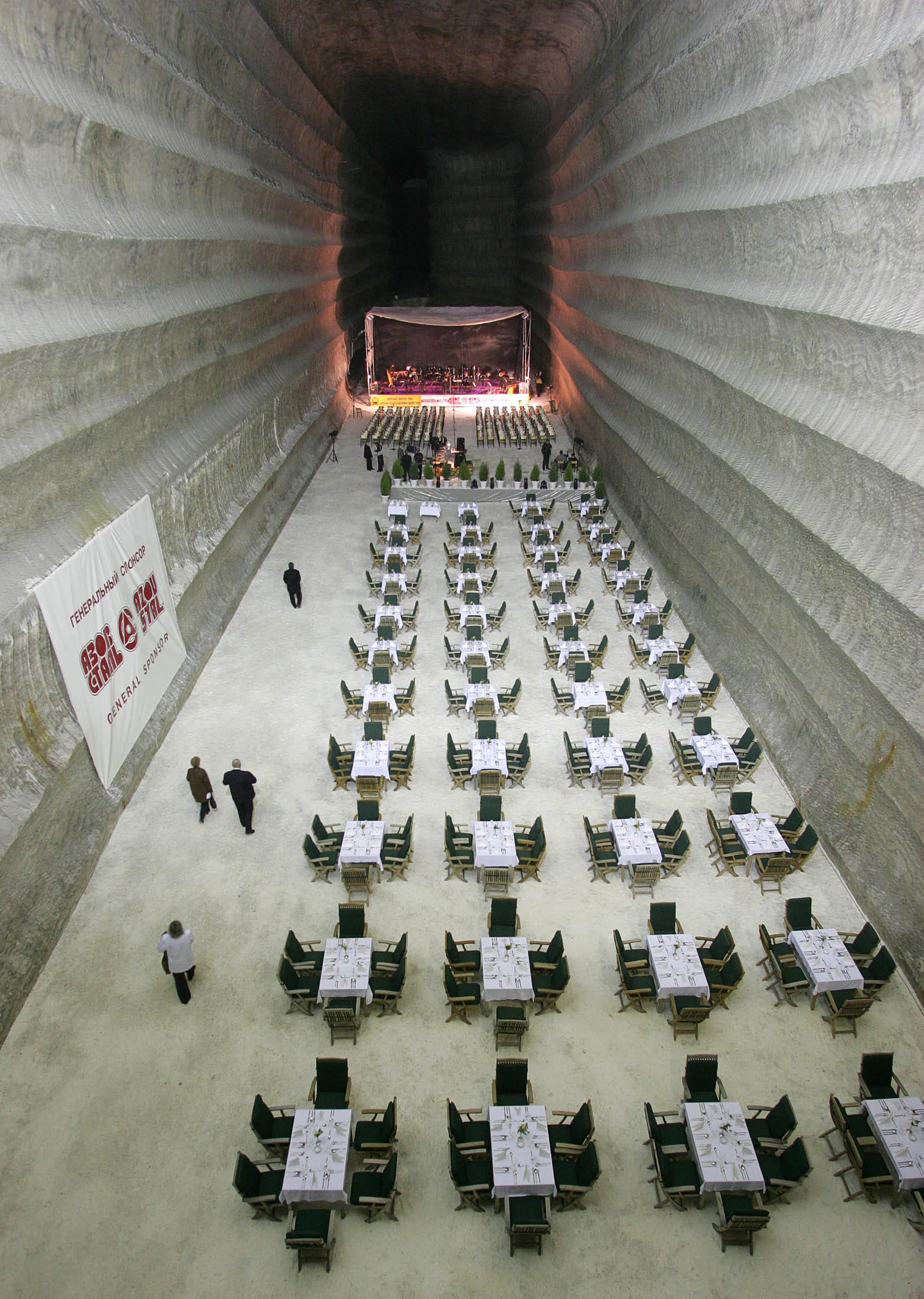 A salt mine is converted into a concert hall for a performance by the Donetsk Symphony orchestra in the town of Soledar, October 2, 2004.

The mines can be up to 1,000 feet deep and its mined tunnels have a combined length of 186 miles, Reuters reported, citing a local tourist website. Huge deposits remain are still to be mined.

The health benefits of salt are well known and the mines’ micro-climate also combines with the healing process.

Near the tourist route there is a speleo-sanitarium where people are treated for bronchial conditions, asthma, chronic pneumonia, some forms of psoriasis, weak immunity, and thyroid diseases.

The mines could provide Russia with a lucrative asset. 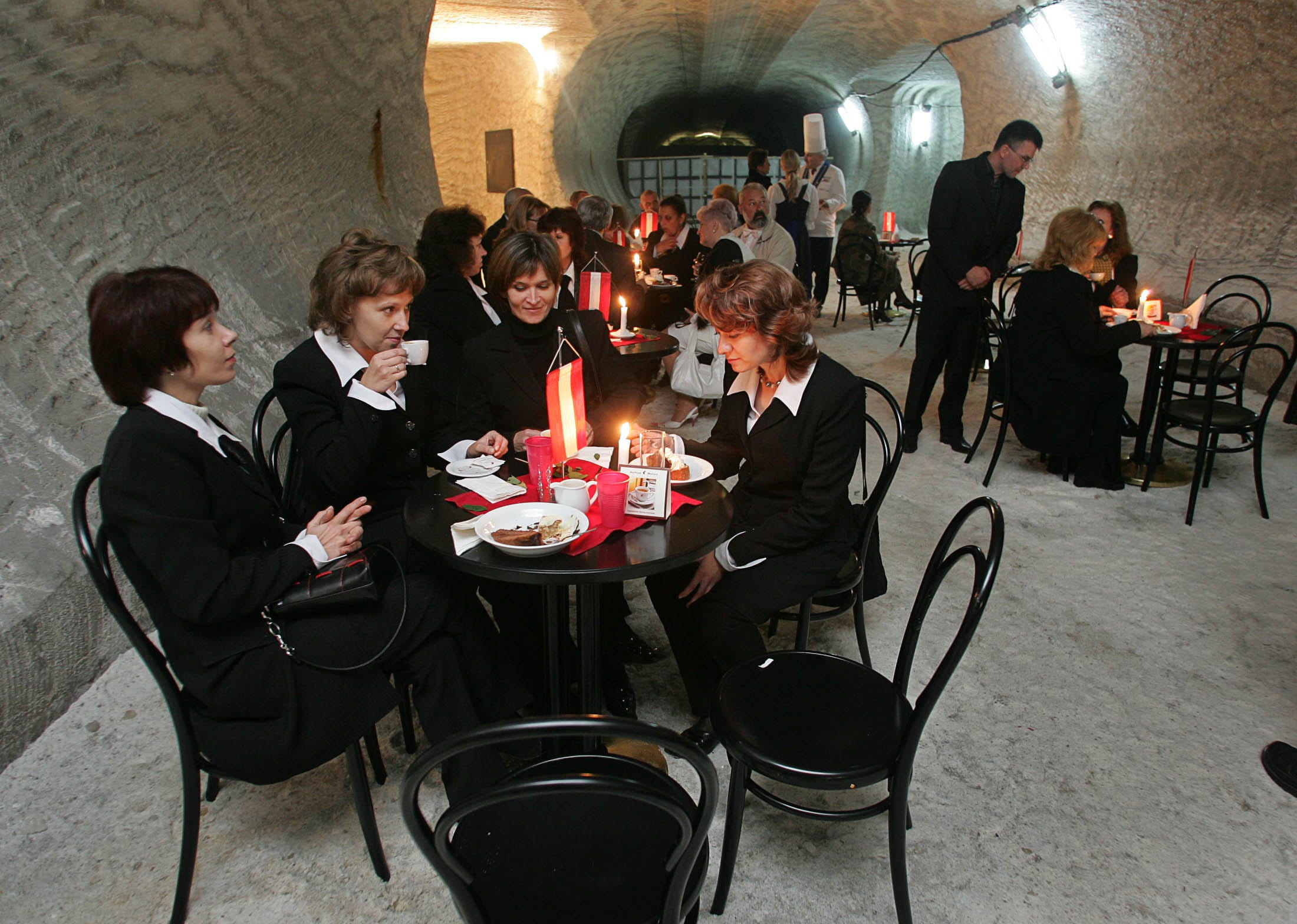 Visitors enjoy their meal at a 980-foot-deep salt mine converted into a concert hall for a performance by the Donetsk Symphony orchestra in the town of Soledar, on October 2, 2004.

Capturing Soledar’s mines, among the largest in Europe, could serve a financial purpose for Russia. The salt from Soledar is known to be very pure.

However, it is unlikely that the current conflict conditions would allow salt mining to restart.

The United States has previously accused mercenaries from the Wagner Group of exploiting natural resources in African countries, including the Central African Republic, Mali, and Sudan, to help fund Moscow’s war in Ukraine.

Russia has rejected those accusations as being “anti-Russian rage.”

The mines could also have a military value. 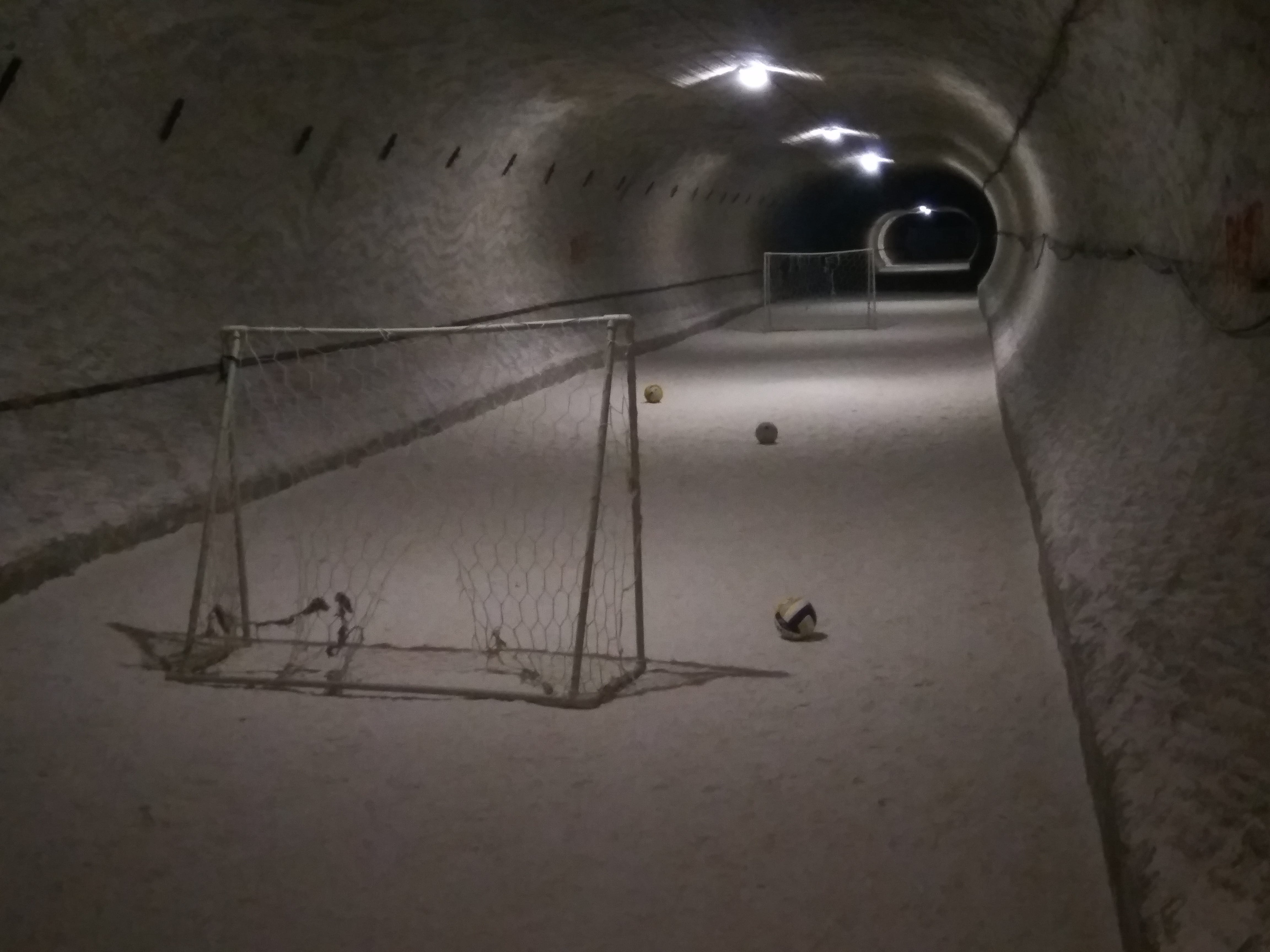 A soccer game was set up in the Soledar salt mine in September 2020.

Capturing the mines could also be valuable to Russia to bolster its defensive position, as they could muster troops and store weapons underground where Ukraine could not strike them.

Prigozhin previously said on Telegram that he wants to capture “the system of Soledar and Bakhmut mines, which is actually a network of underground cities,” which he said could be used in war, according to a translation by Reuters.

Russian forces could then use this position to increase their assault on the nearby city of Bakhmut, which has been the main focus of the war in eastern Ukraine since the summer.

Capturing Soledar could also be a symbolic victory. 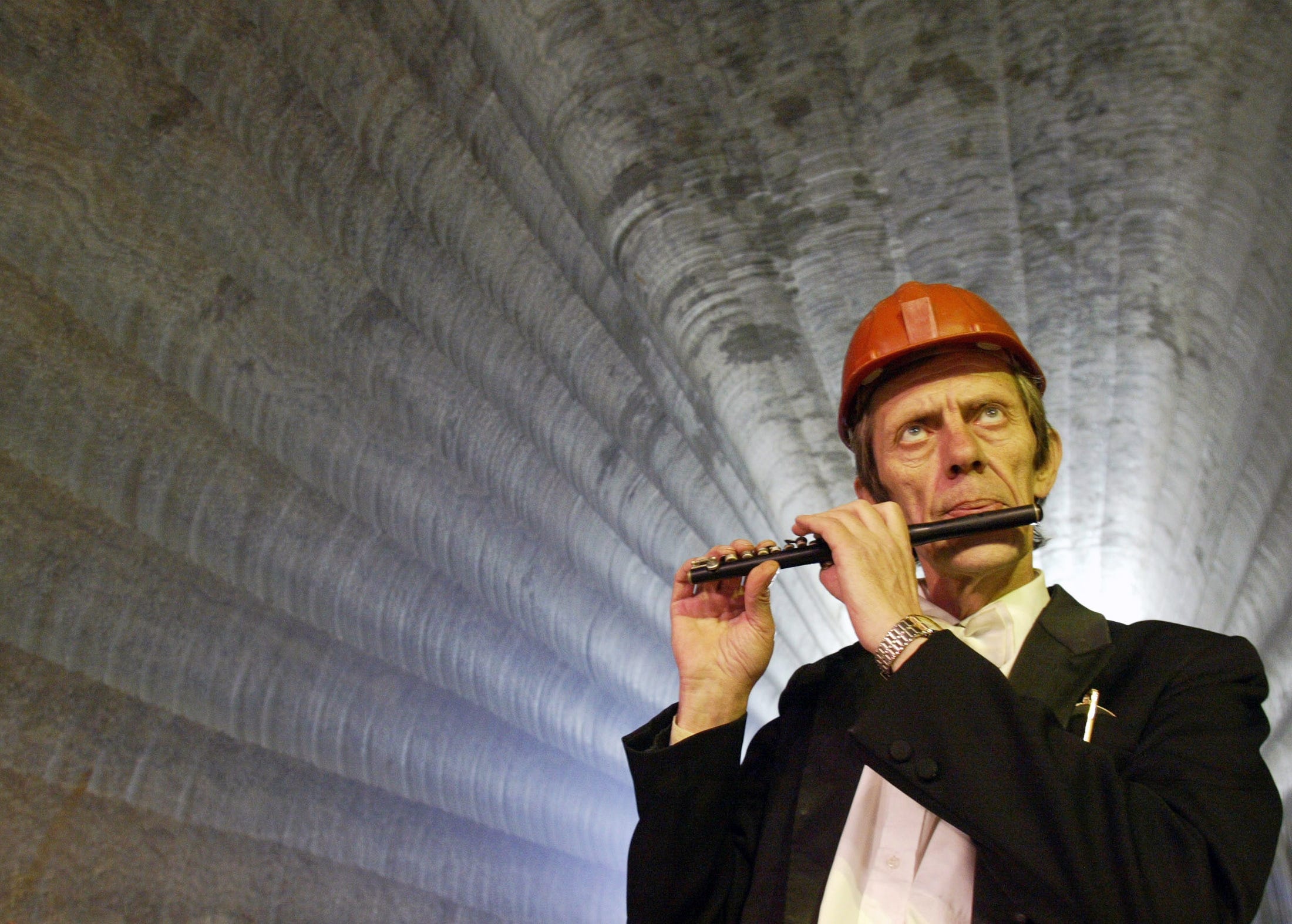 A musician plays the transverse flute during the 3rd Salt Symphony art festival in a salt mine in Soledar, Ukraine, May 27, 2006.

Taking Soledar and its salt mines could also serve as a symbolic victory for the Wagner Group.

Prigozhin said in a Telegram statement on Friday that “Soledar was taken solely by the efforts of the fighters of the Wagner PMC.”

“And there is no need to offend the fighters by humiliating their merit,” he said. “You are demotivating them. We must fight, and not compete in whose dick is bigger and steal other people’s merits.” 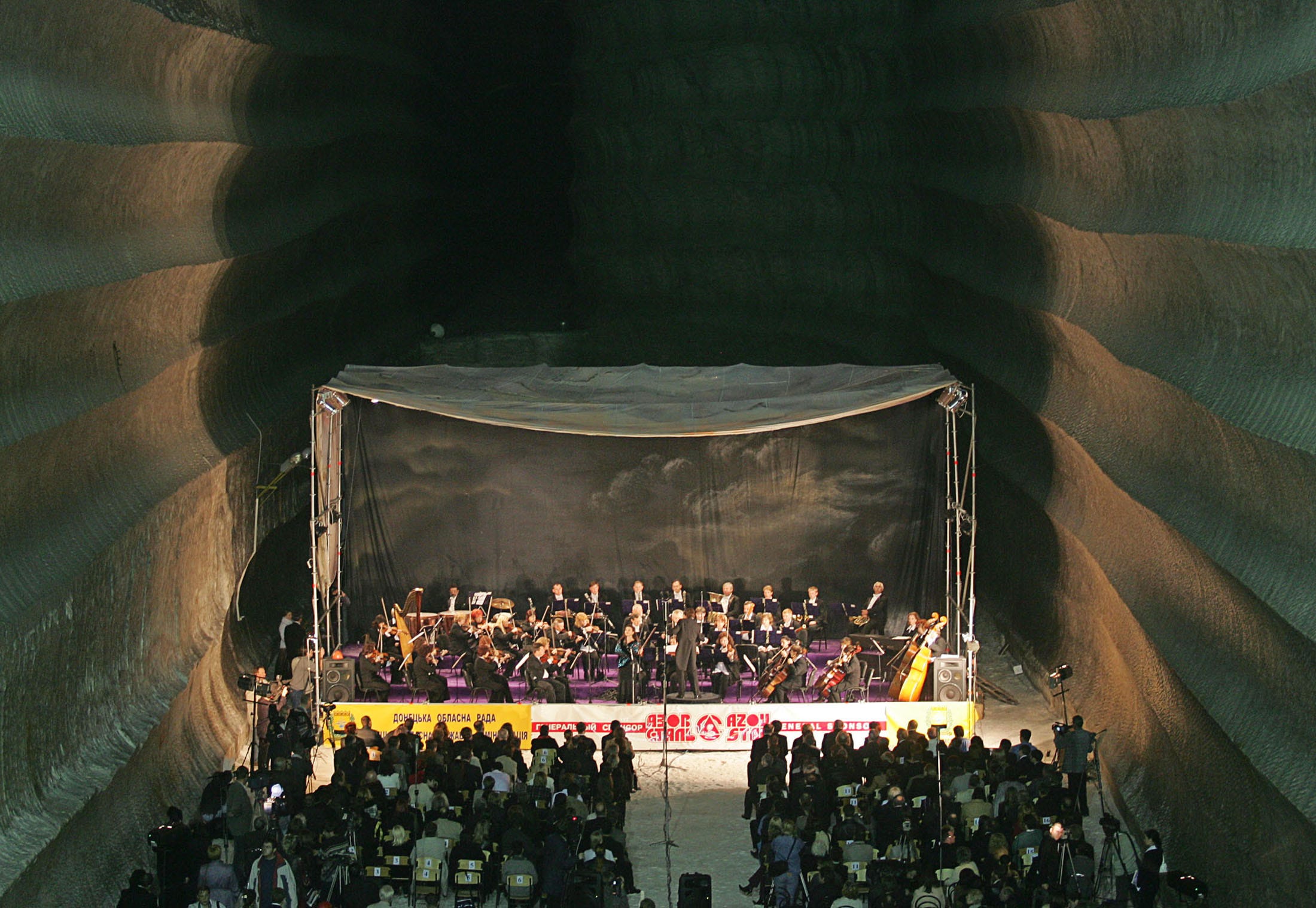 Donetsk Symphony orchestra performs during a concert held in a deep salt mine in the town of Soledar, some 400 km (250 miles) east from the capital Kyiv, October 2, 2004.

The town of Soledar had a pre-war population of just over 10,000, but now lies largely in ruin.

Despite Russia’s efforts, the Institute for the Study of War (ISW) said that taking control of Soledar “will not necessarily allow Russian forces to exert control over critical Ukrainian ground lines of communication into Bakhmut.”

“Even taking the most generous Russian claims at face value, the capture of Soledar would not portend an immediate encirclement of Bakhmut,” the think tank said.