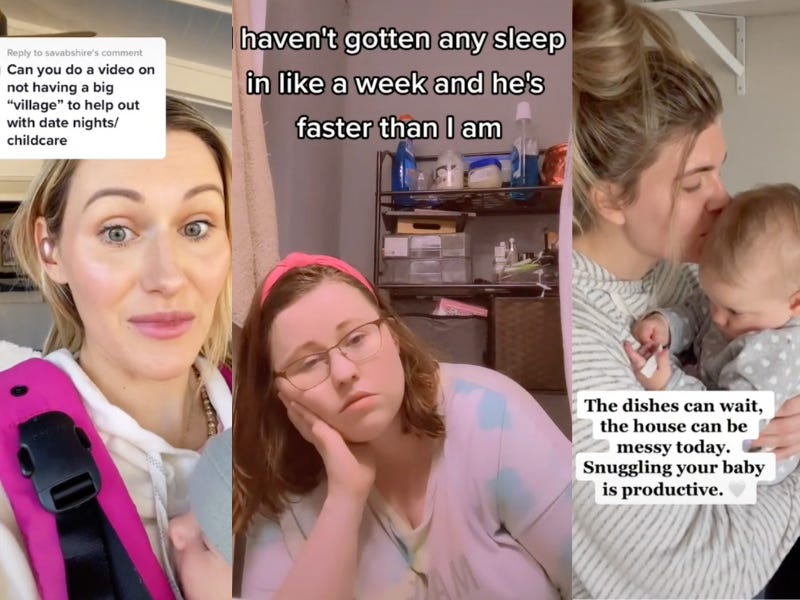 “It takes a village to raise a child,” says the famous African proverb. But many millennial parents are raising children without anything resembling a village to help them.

Some are sharing their childcare struggles on TikTok through hashtags like #MomsofTiktok, #ittakesavillage, and #wheresthevillage.

“Stop telling us ‘it takes a village to raise a child,'” one TikToker wrote in a video caption. “There is no village.”

“Women were never meant to raise their children completely isolated, which is why a lot of us feel completely alone and also depressed,” another said in a video with over 38,000 views.

Allison Ellsworth, a 28-year-old from Michigan, details the ups and downs of raising her two-year-old son for her over 91,000 TikTok followers.

She and her husband often work weekends and holidays, when she says daycare centers often can’t “cater to the days and times” they need. While she occasionally gets help from her parents — who live an hour-and-a-half away — this is “very difficult to arrange,” she told Insider.

They’ve resorted to paying $1,000 to $1,500 per month for private part-time care, which in itself was “very challenging” to find.

“Becoming a parent is more challenging than you can possibly anticipate, no matter how much childcare experience you have,” she said. “I moved away from my family to pursue the job that I have now because I thought that was the best thing for our future. That just put me in a position though, where I don’t have the support system that I need to effectively care for my child.”

In 2018, the left-leaning Center for American Progress found that over half of Americans lived in an area where childcare was sparse, and the shortage only grew worse during the pandemic. Employment in the childcare industry is still down 8% — or 80,000 workers — compared to pre-pandemic levels. When parents do find childcare, it’s often extremely expensive. National childcare costs average between $9,000 and $9,600 annually, per the advocacy organization Child Care Aware, a rate that’s unaffordable for nearly two-thirds of working parents in the US — and the cost could shoot even higher over the next year.

“They say it takes a village because it’s true”

The cost and time commitment of childcare are among the reasons many Americans are choosing to follow their “village” and live close to where they grew up — where they are more likely to have childcare support.

Hannah Cases, a 31-year-old mother of one who works full-time, shares her experiences raising her 16 month year-old child with her over 267,000 TikTok followers.

She and her husband began their journey as parents living in San Diego, where they had “zero family around” to help with childcare, she told Insider.

One week last year, when both she and her husband got sick and it was “extremely hard” to manage, they realized they needed extra help.

“We both felt terrible and just needed an extra set of hands,” she said.

This was among the reasons they moved across the country from San Diego to St. Louis last October. They’re currently living with her parents while they look for a home of their own.

“Now that we have family around it makes such a difference,” she said.

Roughly 60% of young adults live within 10 miles of where they grew up, and 80% live within 100 miles, according to a July study conducted by researchers at the US Census Bureau and Harvard University.

This isn’t possible for all parents, however. And while many that live close to home may find themselves better off when it comes to childcare, some may have to turn down a more desirable or higher-paying job in another state to do so. Others, like Cases, may find life in another state appealing, but ultimately can’t make it work.

In an ideal world, Americans would have access to affordable childcare no matter where they lived, providing them the true geographic flexibility that remote work alone can’t. But that’s not the reality right now in most parts of the US. And it’s why some parents feel living close to family is their best option.

“I would tell other mothers to try to put themselves in a position where they’re surrounded by trusted people that can help them,” Ellsworth said.

“I recommend living close to family if you are able to and have a good relationship,” she said. “It can make such a huge difference and take some of the pressure off of you as a parent. We weren’t meant to do this alone. They say it takes a village because it’s true.”

New ways to find your village

While some politicians are advocating for legislation that could help make childcare more accessible and affordable, this doesn’t help parents today. In the meantime, there are a few potential childcare solutions for families without a traditional village to help them out.

Parents can organize shared childcare with another family — effectively nanny or sitter sharing — to split the bill of their childcare provider. To completely eliminate costs, families can form a parenting co-op, an arrangement of anywhere between three and 20 families, to rotate childcare responsibilities between a group of parents.

While many parents may be hesitant to trust their children with other families, the app Carefully claims to offer an “easy way to build a network of parents you know and trust to share care.”

While none of these solutions are ideal, they may help some struggling families.

Home » Audio Sources - Full Text Articles » They say it takes a village to raise children. But millennial mothers are taking to TikTok to say ‘there is no village’ as their childcare struggles persist.
a