Politics will likely consume much of Pakistan’s time and attention in 2023, as it did in 2022. The country’s turn to political instability last spring did not culminate with a dramatic no-confidence vote in parliament last April that ousted then Pakistani Prime Minister Imran Khan from office. Instability and polarization have only heightened since then: Khan has led a popular opposition movement against the incumbent coalition government and the military, staging a series of large rallies across the country through the year.

The struggle for power in Pakistan continues into 2023. While the incumbent government has not ceded to Khan’s demand for early elections, country-wide elections are constitutionally mandated to be held by October this year. It benefits the government politically to hold them off as long as it possibly can as it tries to dig itself out of Pakistan’s urgent economic crisis and its lackluster domestic performance (its diplomatic foreign policy approach has fared better, but that may not matter for elections). The last year has cost it precious political capital, and Khan’s party did very well in a set of by-elections held in July and October. The state has tried to mire Khan and his party in legal cases, relying on a familiar playbook used against opposition politicians in Pakistan, albeit to limited effect, with the courts’ involvement.

Khan’s party still controls two of Pakistan’s four provinces, Punjab and Khyber Pakhtunkhwa (KP), and the incumbent federal government’s (extra-legal) efforts to try to wrest power from it in Punjab, the largest province, have been unsuccessful (thanks to the courts). The year is off to a dramatic start, with Khan’s party initiating the process to dissolve the Punjab and KP assemblies this month to pressure the federal government into early elections.

For politics-obsessed Pakistan, the biggest question remains who will win the next general election. Will former Prime Minister Nawaz Sharif (brother of current Prime Minister Shehbaz Sharif) return to Pakistan to run as the head of his party, the PML-N? Can Imran Khan win on the strength of his popular support, despite his confrontation with the military? Regardless of the outcome, we can say this much given the histories of the main contenders: The direction of the country is unlikely to change.

Pakistan’s economy has been in crisis for months, predating the summer’s catastrophic floods. Inflation is backbreaking, the rupee’s value has fallen sharply, and its foreign reserves have now dropped to the precariously low level of $4.3 billion, enough to cover only one month’s worth of imports, raising the possibility of default.

An economic crisis comes around every few years in Pakistan, borne out of an economy that doesn’t produce enough and spends too much, and is thus reliant on external debt. Every successive crisis is worse as the debt bill gets larger and payments become due. This year, internal political instability and the flooding catastrophe have worsened it. There is a significant external element to the crisis as well, with rising global food and fuel prices in the wake of Russia’s war in Ukraine. The combination of all these factors has spelled perhaps the greatest economic challenge Pakistan has ever seen. Yet the government has been mired in politicking, and the release of a $1.1 billion loan tranche from the International Monetary Fund (IMF) remains stalled as Islamabad has pushed back on the IMF’s conditions. The government has now resorted to limiting imports and shutting down malls and wedding halls early, small measures that fail to adequately address the problem.

Pakistan may end up avoiding default for the time being with IMF help and loans from friendly countries, especially Saudi Arabia and other Gulf nations. But those won’t address the clear underlying malaise of the economy – and the fact that something fundamentally will need to change, in terms of how much the economy produces versus how much it spends, to avoid default down the road. But none of Pakistan’s political parties seem to have the political will or ability to bring about such change.

Pakistan must reportedly pay back $73 billion by 2025; it won’t be able to do so without debt restructuring.

A “monsoon on steroids” – directly linked to climate change – caused a summer of flooding in Pakistan so catastrophic that it has repeatedly been described as biblical. It left a third of the country under water – submerging entire villages – killed more than 1,700, destroyed homes, infrastructure, and vast cropland, and left millions displaced.

More than four months after the worst of the flooding, nearly 90,000 people are still displaced from their homes, and the floodwater is still standing in some areas. It would be enormously difficult for any country to recover from such a disaster and rebuild lost infrastructure, including roads and schools, let alone a government dealing with a cash crunch like Pakistan’s.

But the Pakistani government – in particular the foreign minister Bilawal Bhutto Zardari, who has visited the United States twice since the summer, and the minister for climate change, Sherry Rehman – has done an admirable job bringing awareness of the flooding catastrophe to the world stage. A donors’ conference Sharif co-hosted with the United Nations Secretary General Antonio Guterres in Geneva this month raised pledges for more than $9 billion for flood recovery over the next three years (the money is mostly in the form of project loans). Pakistan has also played an important role in discussions about the devastating effects of climate change on developing nations, spearheading the effort to place loss and damage on the agenda at COP27 for the first time, and pushing for COP delegates in Egypt to agree to a loss and damage fund.

With billions of dollars in help promised, the government has passed one hurdle. But the road for recovery ahead will be tough: Displaced people are still sleeping under open skies in Sindh province. Implementing a sustainable recovery will require enormous capacity, resources, and transparency in a country already mired in other troubles.

The Pakistani Taliban (or TTP), the terrorist group responsible for killing tens of thousands of Pakistanis from 2007 to 2014, have been emboldened – predictably so – by a Taliban-ruled Afghanistan, and once again pose a threat to Pakistan, albeit in a geographically limited region (for now). The group engaged in at least 150 attacks in Pakistan last year, mostly in the northwest. Because the TTP have sanctuary in Afghanistan, the Pakistani state increasingly finds itself out of options when it comes to dealing effectively with the group. The state’s negotiations with the TTP have failed repeatedly, as they are bound to, because the group is fundamentally opposed to the notion of the Pakistani state and constitution as it exists today. The Afghan Taliban have, unsurprisingly, also not proved to be of help in dealing with the TTP – and Pakistan’s relations with the Afghan Taliban have deteriorated significantly at the same time over other issues, including the border dividing the two countries.

At this point, Pakistan’s first preference will be to strike kinetically at TTP targets within its borders, but that will be limited by TTP movement across the border into Afghanistan. That movement is what leaves Pakistan with the difficult-to-resolve TTP issue and complicates things beyond the military operation it launched against the group in 2014. Still, the Pakistani Taliban at this point is not the biggest threat Pakistan faces, given the country’s major political and economic challenges – but left unchecked, it could morph into a significant crisis.

Pakistan has a new chief of army staff as of November 29 last year. General Asim Munir replaced General Qamar Javed Bajwa, who had held the all-powerful post for six years (due to a three-year extension). The appointment of the army chief was a subject of considerable political contention last year; a major part of the reason Khan was ousted from power was his falling out with the military on questions over the appointments of top army officials.

All eyes are now on how civil-military relations shape up under Munir. Under Bajwa, the military solidified its control over all manner of policy behind the scenes. Bajwa presided over a close “same-page” relationship with Khan; when that frayed, the PML-N was eager to take Khan’s place as the military’s ally and head of the civilian government. Bajwa left office saying the army would no longer be involved in political matters; few in Pakistan believe him. With politics set to dominate the agenda this year and an election imminent, Munir has a chance to show the country whether he will follow in his predecessor’s footsteps, or chart a new course for civil-military relations in Pakistan. Pakistan’s history indicates the former. 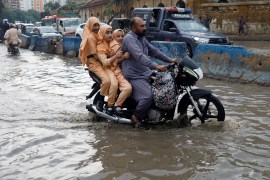