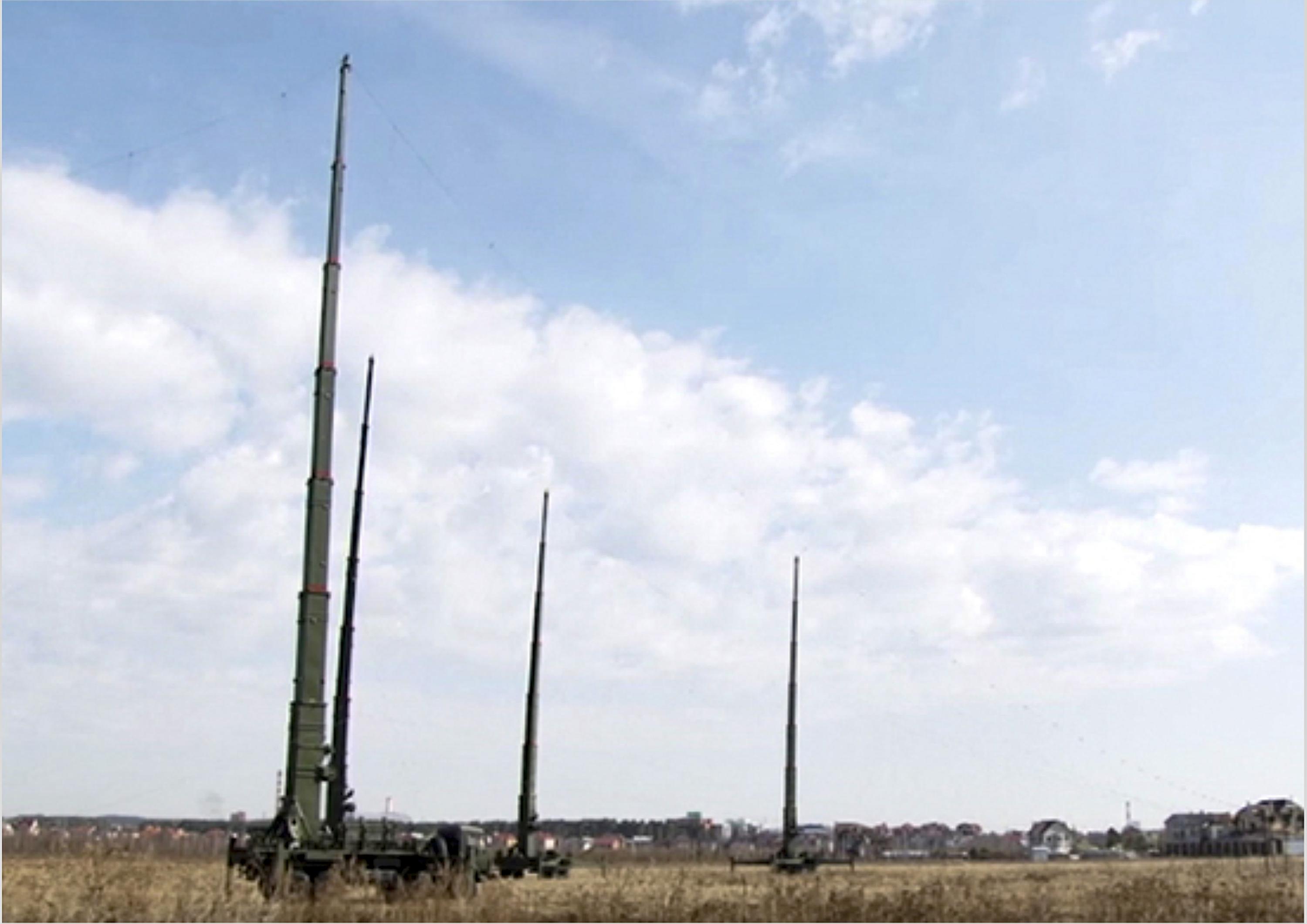 KYIV, Ukraine (AP) — On Ukraine’s battlefields, the simple act of powering up a cellphone can beckon a rain of deathly skyfall. Artillery radar and remote controls for unmanned aerial vehicles may also invite fiery shrapnel showers.

Electronic warfare technology targets communications, navigation and guidance systems to locate, blind and deceive the enemy and direct lethal blows. It is used against artillery, fighter jets, cruise missiles, drones and more. Militaries also use it to protect their forces.

It’s an area where Russia was thought to have a clear advantage going into the war. Yet, for reasons not entirely clear, its much-touted electronic warfare prowess was barely seen in the war’s early stages in the chaotic failure to seize the Ukrainian capital of Kyiv.

It has become far more of a factor in fierce fighting in eastern Ukraine, where shorter, easier-to-defend supply lines let Russia move electronic warfare gear closer to the battlefield.

“They are jamming everything their systems can reach,” said an official of Aerorozvidka, a reconnaissance team of Ukrainian unmanned aerial vehicle tinkerers, who spoke on the condition of anonymity because of safety concerns. “We can’t say they dominate, but they hinder us greatly.”

A Ukrainian intelligence official called the Russian threat “pretty severe” when it comes to disrupting reconnaissance efforts and commanders’ communications with troops. Russian jamming of GPS receivers on drones that Ukraine uses to locate the enemy and direct artillery fire is particularly intense “on the line of contact,” he said.

Its own electronic warfare capability is hard to assess. Analysts say it has markedly improved since 2014, when Russia seized Crimea and instigated a separatist revolt in eastern Ukraine. But there are setbacks. Last week, Russia claimed it destroyed a Ukrainian electronic intelligence center in the southeastern town of Dniprovske. The claim could not be independently confirmed, and Ukrainian officials did not respond to a request for comment.

Ukraine has also made effective use of technology and intelligence from the United States and other NATO members. Such information helped Ukraine sink the battle cruiser Moskva. Allied satellites and surveillance aircraft help from nearby skies, as does billionaire Elon Musk’s Starlink satellite communications network.

Electronic war has three basic elements: probe, attack and protect. First, intelligence is gathered by locating enemy electronic signals. On attack, “white noise” jamming disables and degrades enemy systems, including radio and cellphone communications, air defense and artillery radars. Then there is spoofing, which confuses and deceives. When it works, munitions miss their targets.

“Operating on a modern battlefield without data is really hard,” said retired Col. Laurie Buckhout, a former U.S. Army electronic warfare chief. Jamming “can blind and deafen an aircraft very quickly and very dangerously, especially if you lose GPS and radar and you’re a jet flying at 600 miles an hour.”

All of which explains the secrecy around electronic warfare.

“It is an incredibly classified field because it is highly dependent on evolving, bleeding-edge technologies where gains can be copied and erased very quickly,” said James Stidham, a communications security expert who has consulted for the U.S. State and Homeland Security departments.

Ukraine learned hard lessons about electronic warfare in 2014 and 2015, when Russia overwhelmed its forces with it. The Russians knocked drones out of the sky and disabled warheads, penetrated cellphone networks for psychological ops and zeroed in on Ukrainian armor.

One Ukrainian officer told Christian Brose, an aide to the late U.S. Sen. John McCain, R-Ariz., how Russian info warriors tricked a commander into returning a wireless call from his mother. When he did, they geolocated him in mid-call and killed him with precision rockets, Brose wrote in the book “The Kill Chain.”

The U.S. also experienced Russia’s electronic warfare in action in Syria, where the adversaries have backed opposing sides in the civil war. In 2018, U.S. Special Operations chief Gen. Raymond Thomas described how U.S. pilots’ communications were regularly “knocked down” in Syria in the “most aggressive” electronic warfare environment on the planet. Russia’s advanced systems are designed to blind U.S. Airborne Warning and Control Systems, or AWACS, aircraft — the eyes and ears of battlefield commanders — as well as cruise missiles and spy satellites.

In the current war, electronic warfare has become a furious theater of contention.

Ukrainian officials say their electronic warfare capabilities have improved radically since 2015. They include the use of encrypted U.S and Turkish communications gear for a tactical edge. Ukraine has advanced so much it exports some of its technology.

Russia has engaged in GPS jamming in areas from Finland to the Black Sea, said Lt. Col. Tyson Wetzel, an Air Force fellow at the Atlantic Council. One regional Finnish carrier, Transaviabaltica, had to cancel flights on one route for a week as a result. Russian jamming has also disrupted Ukrainian television broadcasting, said Frank Backes, an executive with California-based Kratos Defense, which has satellite ground stations in the region.

Yet in the war’s early days, Russia’s use of electronic warfare was less effective and extensive than anticipated. That may have contributed to its failure to destroy enough radar and anti-aircraft units to gain air superiority.

Russia’s defense ministry did not respond to a request for comment for this article.

Some analysts believe Russian commanders held back units fearing the units would be captured. At least two were seized. One was a Krasukha-4, which a U.S. Army database says is designed to jam satellite signals as well as surveillance radar and radar-guided weapons from more than 100 miles (160 kilometers) away. The other: the more advanced Borisoglebsk-2, which can jam drone guidance systems and radio-controlled land mines.

Russia may have also limited the use of electronic warfare early in the conflict because of concerns that ill-trained or poorly motivated technicians might not operate it properly.

“What we’re learning now is that the Russians eventually turned it off because it was interfering with their own communications so much,” said retired Lt. Gen. Ben Hodges, a former U.S. Army commander for Europe.

The communications problems were evident with many Russian troops talking on insecure open radio channels, easily monitored by outsiders.

It’s unclear how much of an edge Russia’s electronic assets may now offer. Ukraine’s forces are now more concentrated than early in the war, which could make them easier to target.

Much depends on whether Russia’s battalion tactical groups “are configured in reality as they are on paper,” said James Rands, of the Jane’s military intelligence think tank. Each group, comprised of roughly 1,000 troops, is supposed to have an electronic warfare unit. The Pentagon says 110 such groups are in Ukraine.

The Kremlin also claims to have more than 1,000 small, versatile Orlan-10 unmanned aerial vehicles it uses for reconnaissance, targeting, jamming and cellphone interception.

Russia has lost about 50 of its Orlan-10s in the war, but “whatever they lost could be a small portion of what’s flying,” said researcher Samuel Bendett, of the Center for Naval Analyses think tank.

Ukraine’s relative UAV strength is unclear, but Ukrainians have adapted such technologies as software-defined radio and 3D printing to stay nimble.

The U.S. and Britain also supply jamming gear, but how much it helps is unclear. Neither country has offered details. The ability of both sides to disable the other’s drones is crucial with the artillery they scout now so decisive in battles.

Musk’s Starlink is a proven asset. Its more than 2,200 low-orbiting satellites provide broadband internet to more than 150,000 Ukrainian ground stations. Severing those connections is a challenge for Russia. It is far more difficult to jam low-earth orbiting satellites than geostationary ones.

Musk has won plaudits from the Pentagon for at least temporarily defeating Russian jamming of Ukrainian satellite uplinks with a quick software fix. But he has warned Ukrainians to keep those terminals powered down when possible — they are vulnerable to geolocation — and recently worried on Twitter about redoubled Russian interference efforts.

“I’m sure that the Russians are getting smarter about that now,” said Wetzel, the Air Force lieutenant colonel.