Listen to this article
2023-01-17T09:17:39Z
Kyiv’s infrastructure could collapse at any second as Russia’s sporadic missile attacks along with freezing winter temperatures put local authorities under increasing strain, the Ukrainian capital’s mayor said on Monday (January 16).

Ukraine came a step closer on Tuesday to winning the fleet of Western battle tanks it hopes could turn the course of the war, after Germany said tanks would be the first item on the agenda of a new defence minister.

In the central city of Dnipro, the body of a child was retrieved from the rubble of an apartment block on Tuesday, raising the death toll to 41 in the deadliest attack for civilians of a three-month Russian missile bombardment campaign.

Nearly 11 months after Russia invaded, Kyiv says a modern fleet of Western battle tanks would give its forces the mobile firepower they need to drive Russian troops from their territory in decisive battles in 2023.

German-made Leopard battle tanks – the workhorse of armies across Europe – are widely seen as the only plausible choice to supply Ukraine with the large-scale tank force it needs. But they cannot be delivered without authorisation from Berlin, which has so far stalled on taking a decision.

With Western allies meeting at a U.S. airbase in Germany on Friday to pledge military support for Ukraine, Berlin is under intense pressure to lift its objections this week, in what would be one of the most consequential shifts in Western aid so far.

German Defence Secretary Christine Lambrecht quit on Monday, paving the way for Berlin to appoint a successor who can take a quick decision.

“When the person, when the minister of defence, is declared, this is the first question to be decided concretely,” German Economy Minister Robert Habeck told Deutschlandfunk radio broadcaster on Tuesday.

Germany has been cautious about approving tanks, saying it is concerned such a move could be seen as an escalation. Many allies say that concern is misplaced, with Russia showing no sign of backing down from its assault on its neighbour.

Britain broke the taboo over sending heavy tanks over the weekend, pledging a squadron of its Challengers. But it has too few for them to form the basis of a Ukrainian force. Washington’s Abrams tanks are also seen as inappropriate in large numbers because they run on jet engines that burn too much fuel to be practical for Ukraine.

That leaves the Leopards, which Germany made in the thousands during the Cold War and which are now fielded by armies across Europe. Poland and Finland have already said they would send Leopards if Berlin gave approval.

“All of this currently relies on the German government’s decisions – not only whether the Germans will supply their own Leopards, but whether or not they’ll give permissions to others. I would urge my German colleagues to do that,” British Defence Secretary Ben Wallace said on Monday.

Germany’s new defence minister is expected to host U.S. Defense Secretary Lloyd Austin on Thursday ahead of Friday’s big meeting of allies at Ramstein air base, where big pledges of new military support for Ukraine are expected.

Tens of thousands of people have been killed and millions driven from their homes since Russia launched what it calls a “special military operation” in Ukraine in February last year.

Ukrainian forces drove Russian troops back during the second half of 2022, but over the past two months the front lines have largely been frozen in place despite both sides enduring heavy losses in relentless fighting. Ukrainian officials say tanks would be key to breaking the stalemate.

Russia claims to have captured the small mining town of Soledar on the outskirts of the eastern city of Bakhmut last week. Kyiv has said it is still fighting there.

Moscow, meanwhile, has turned since October to a tactic of raining missiles down on Ukrainian cities far from the front, mainly targeting electricity infrastructure.

Russia says it aims to reduce Ukraine’s ability to fight; Kyiv says the attacks serve no military purpose and are intended to harm civilians, a war crime.

In Dnipro, local residents left flowers and cuddly toys at a makeshift memorial near the apartment block where so many died in the explosion during Russia’s wave of missile attacks on Saturday.

A soldier staggered away, wiping away tears, after laying flowers on the seat of a transport shelter turned into a temporary monument to the victims. A candle burned beside the growing pile of toys and bouquets.

“We came here to look, pay our respects. It is very tough, such a shame about lives lost,” said 63-year-old Viktoria.

Moscow denies intentionally targeting civilians and blamed Ukraine’s air defences for the missile that hit the apartments. Kyiv says it was hit by a notoriously inaccurate Russian anti-ship missile for which Ukraine has no defences.

President Volodymyr Zelenskiy said in his Monday night video address that the attack on Dnipro and Russia’s attempts to gain the initiative in the war underscored the need for the West “to speed up decision-making” in supplying weapons.

Russia attacked Ukraine in February last year, saying Kyiv’s close ties with the West created a security threat. Ukraine and its Western allies call it an unprovoked war to seize land and impose Russia’s will on its neighbour. 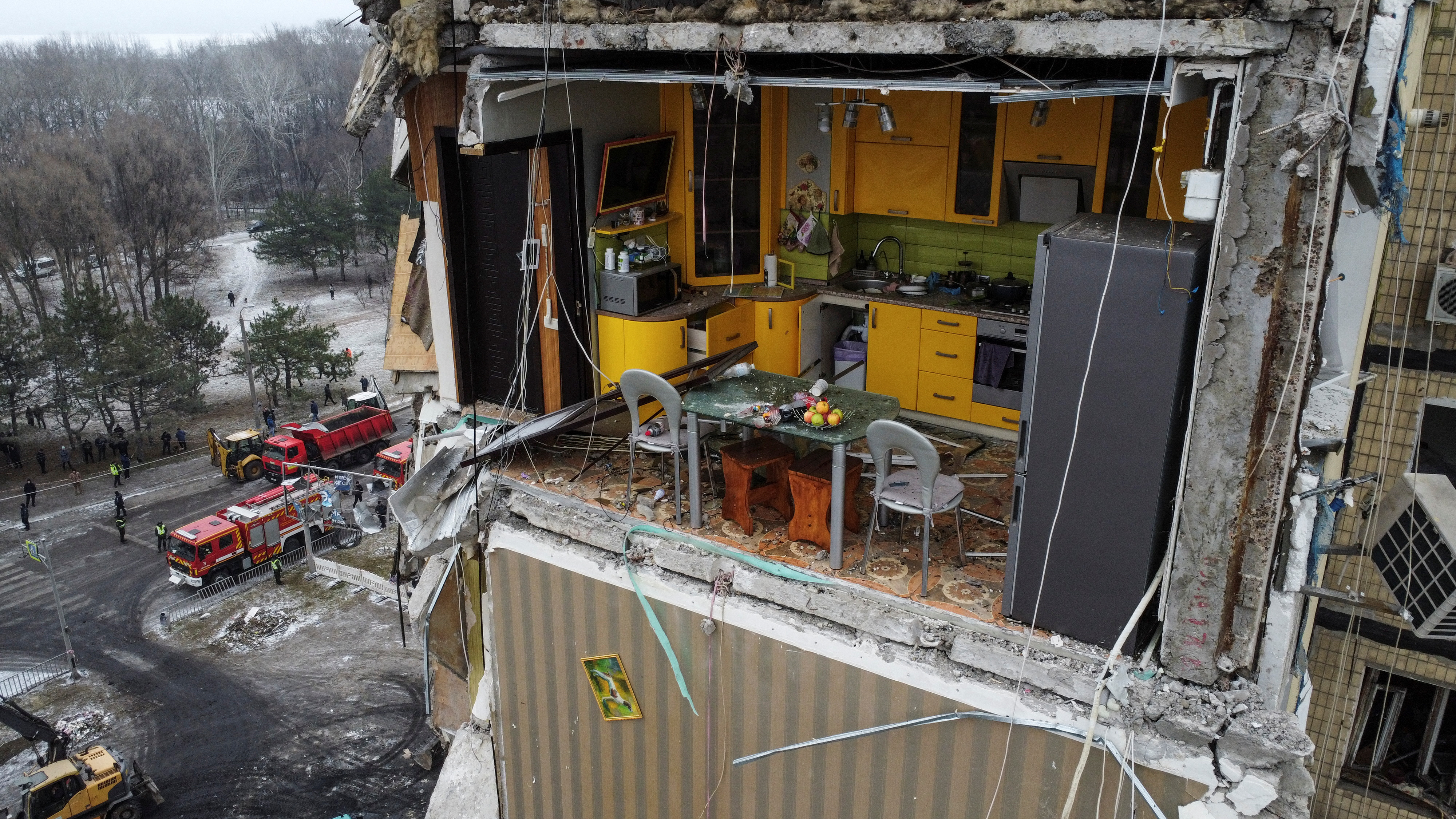 A view shows a kitchen inside an apartment block heavily damaged by a Russian missile strike, amid Russia’s attack on Ukraine, in Dnipro, Ukraine January 15, 2023. REUTERS/Yan Dobronosov 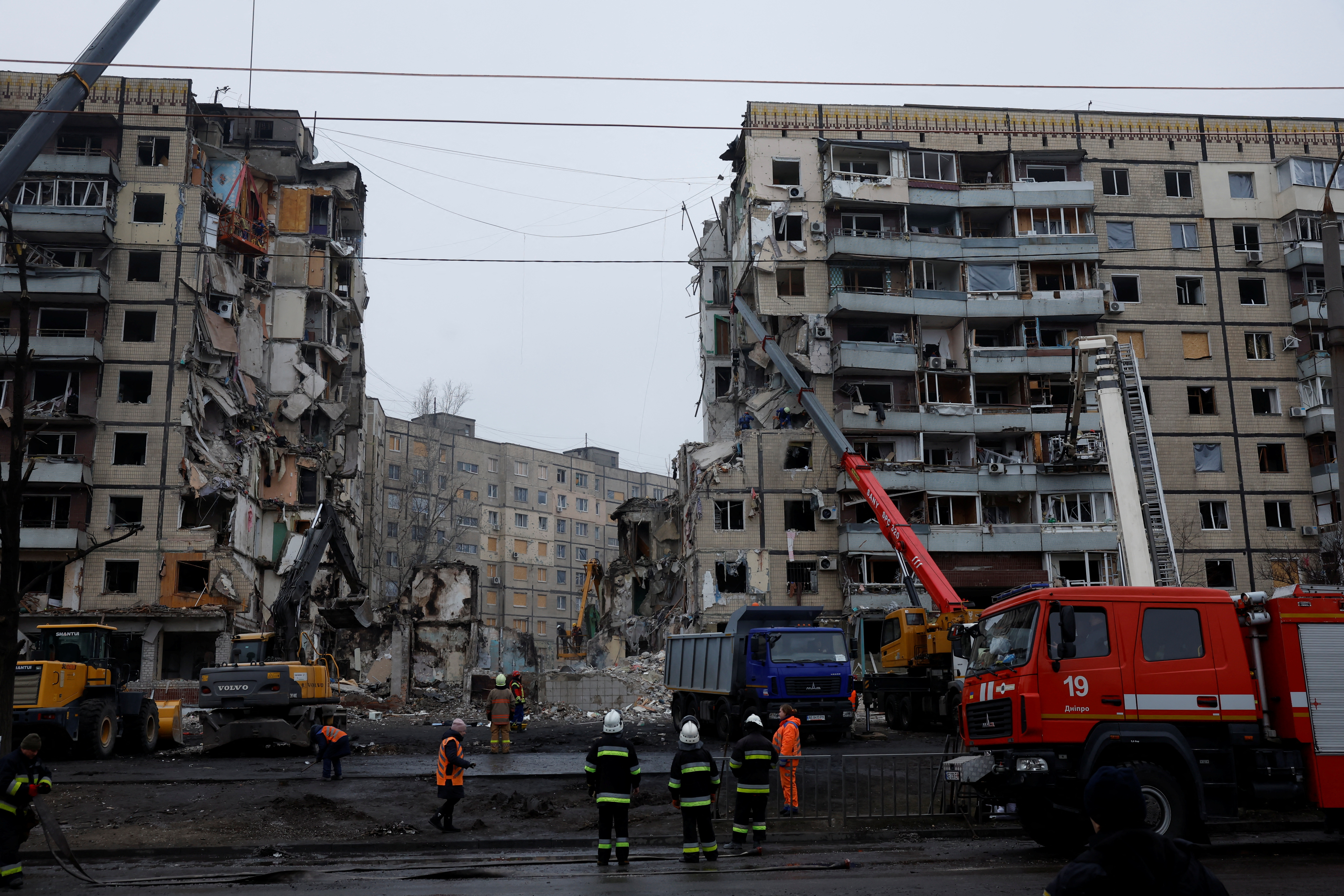 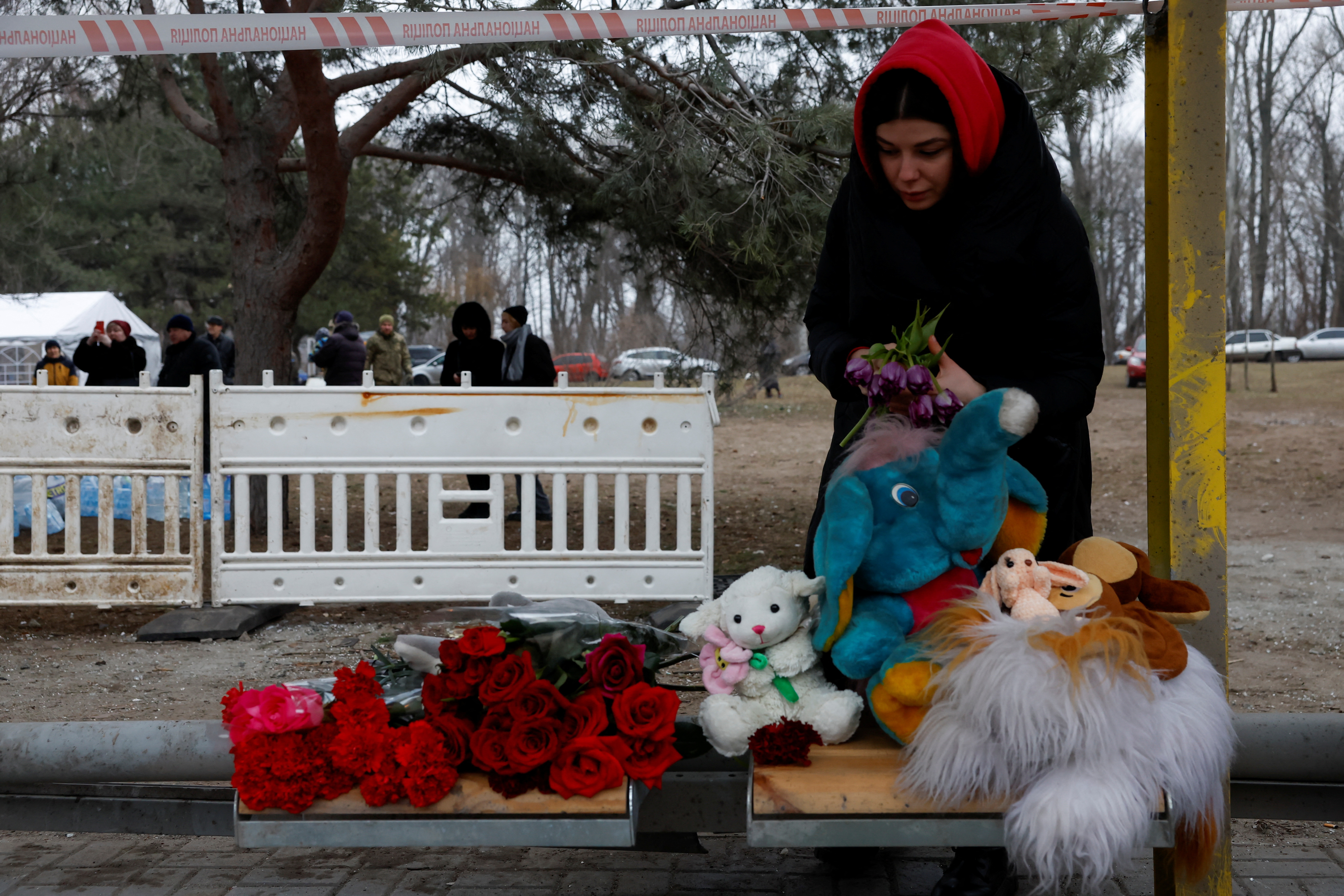 A woman leaves tributes near the site where an apartment block was heavily damaged by a Russian missile strike, amid Russia’s attack on Ukraine, in Dnipro, Ukraine January 16, 2023. REUTERS/Clodagh Kilcoyne 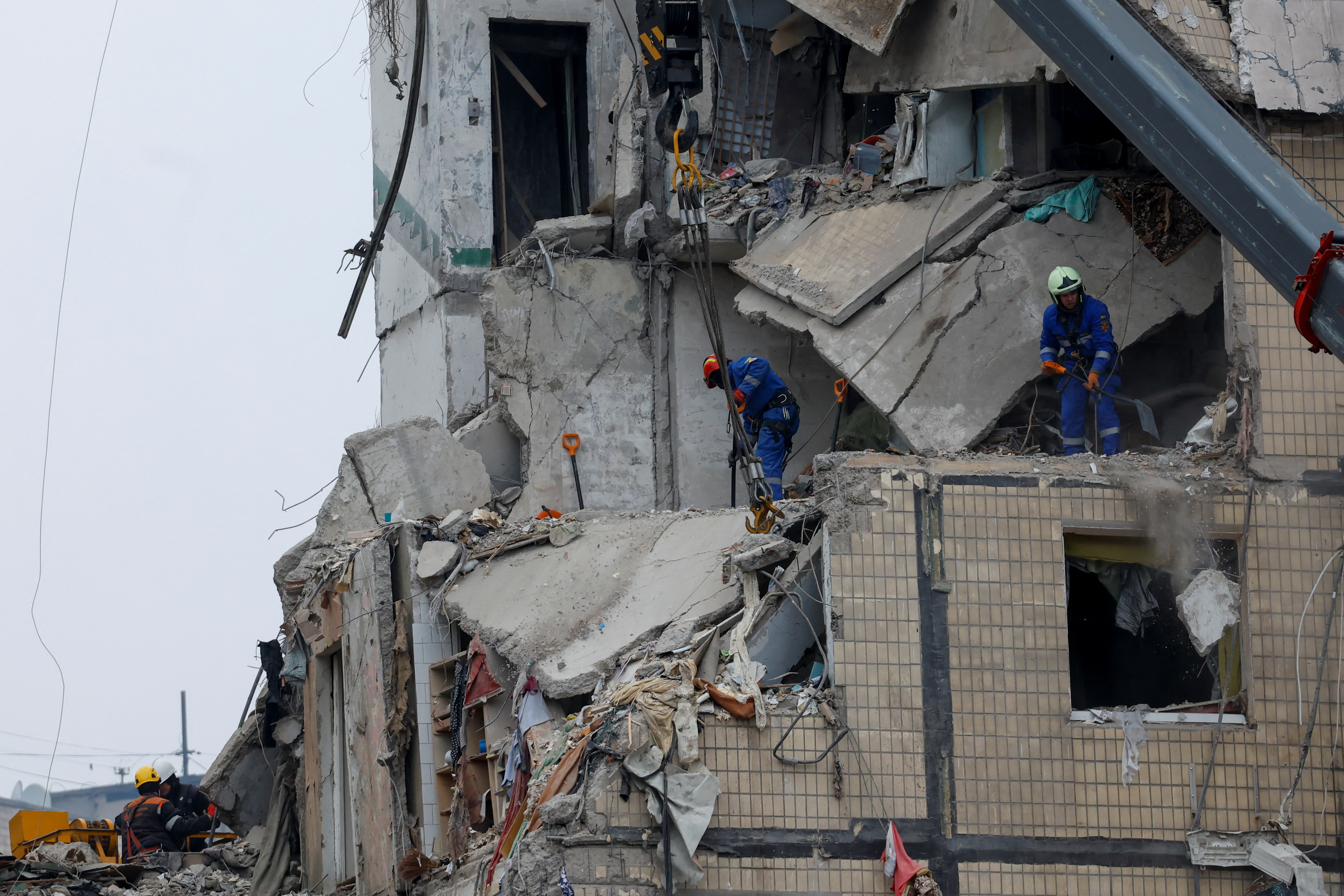 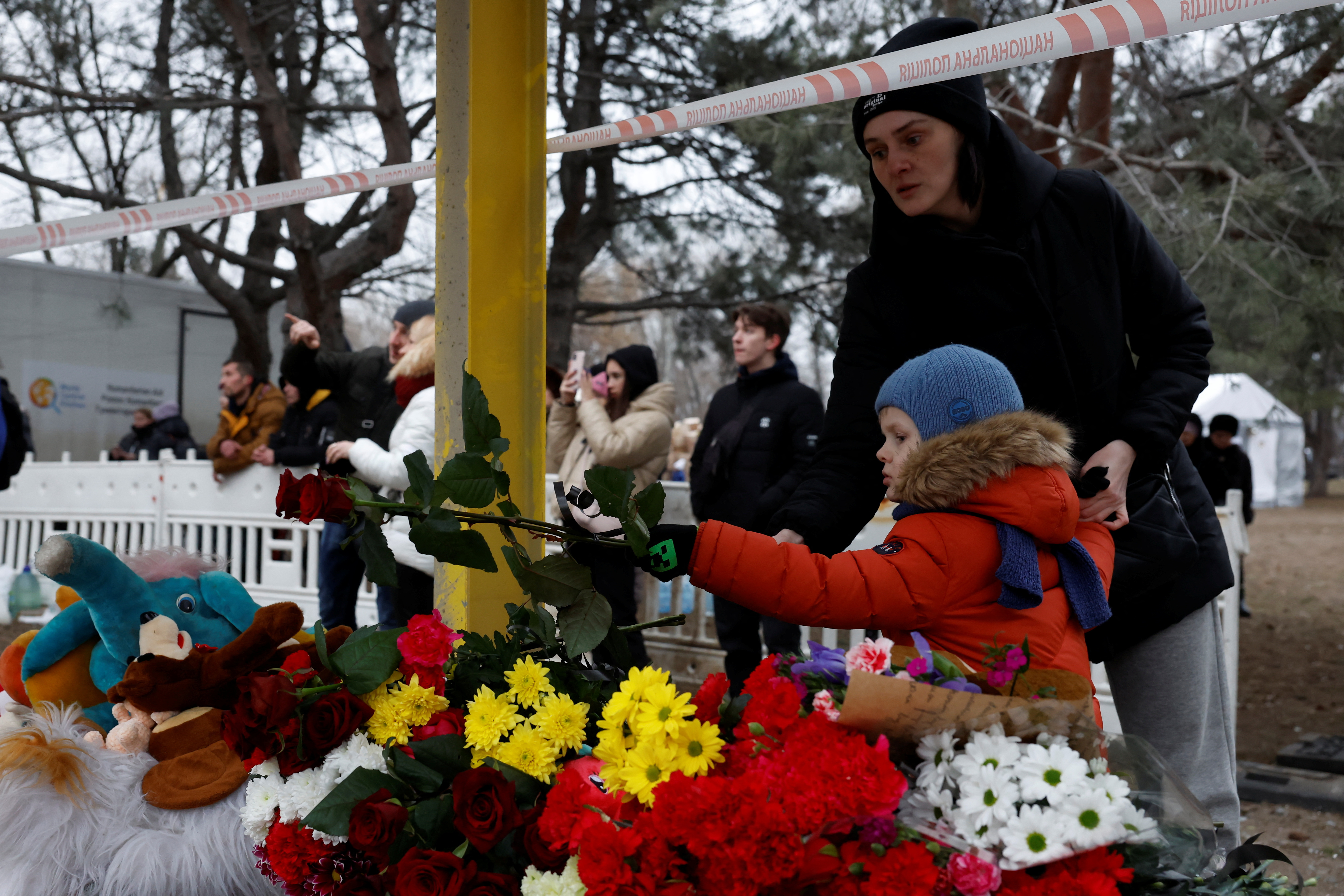 A woman and a child leave tributes near the site where an apartment block was heavily damaged by a Russian missile strike, amid Russia’s attack on Ukraine, in Dnipro, Ukraine January 16, 2023. REUTERS/Clodagh Kilcoyne
Spread the news