LIMA (Reuters) – Thousands took to the streets of Peru’s capital Lima on Thursday in a peaceful protest against the new government and president, after weeks of bloody clashes triggered by the ousting of former President Pedro Castillo left at least 42 dead. 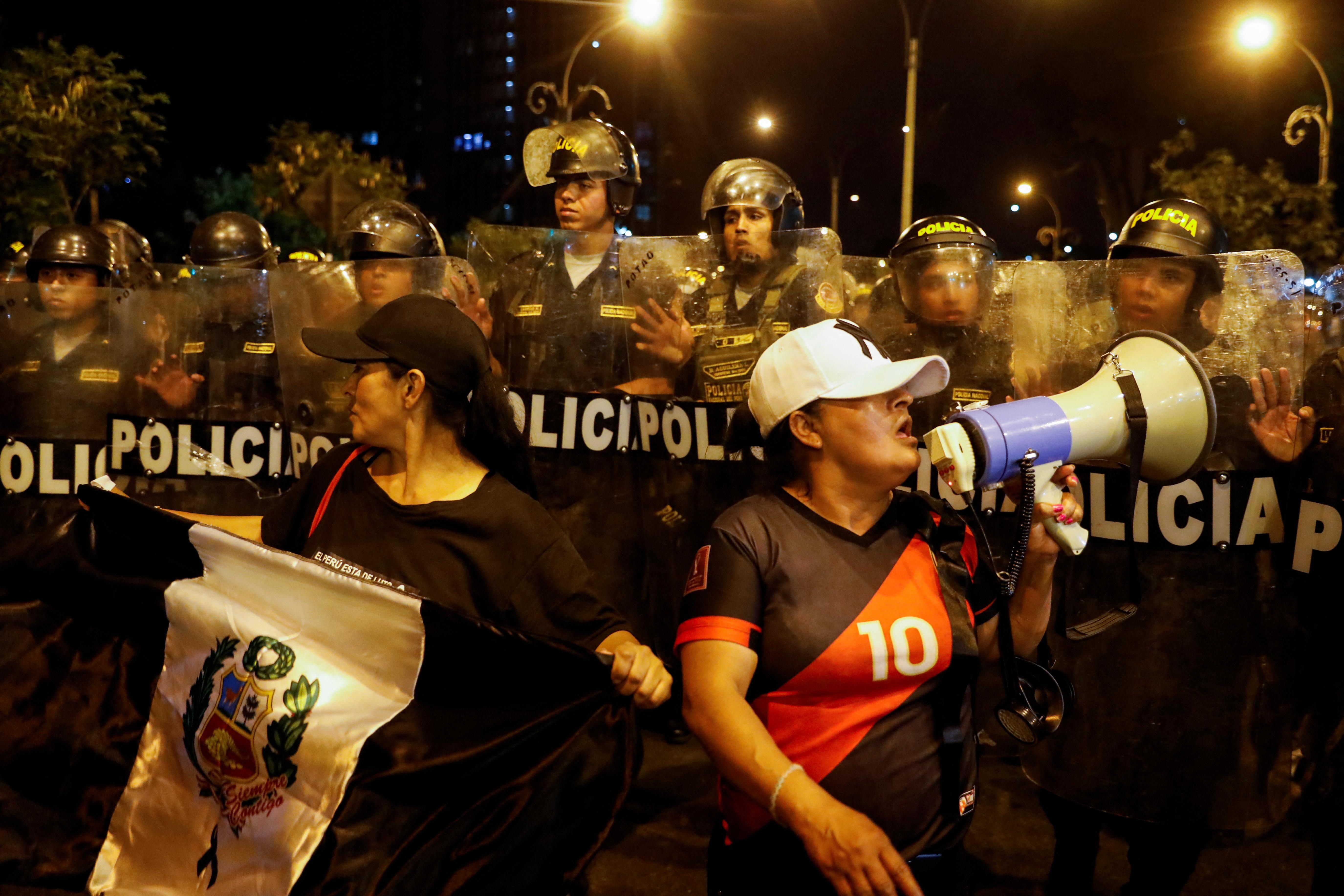 A demonstrator holds a flag as another demonstrator uses a speaker and security forces stand guard during a protest to demand the dissolution of Congress and democratic elections, rejecting Dina Boluarte as Peru’s president, after the ouster of leftist President Pedro Castillo, in Lima, Peru January 12, 2023. REUTERS/Alessandro Cinque

“Why are you turning your back on the people, there are so many deaths, for God’s sake, stop this massacre,” said protester Olga Espejo, calling on President Dina Boluarte, previously Castillo’s vice president, to resign.

“Ms. Boluarte, they are using you,” she said.

Protesters shouted “Dina asesina!” (Dina is a murderer) as they carried cardboard coffins, photos of the victims and anti-government slogans down the streets of Lima in the capital’s first mass protest since New Year.

The march, organized by trade unions and leftist groups, took place without incident. The clashes that started in early December mark Peru’s worst outbreak of violence in more than 20 years.

While Thursday’s protest was underway, Labor Minister Eduardo Garcia announced his resignation on Twitter, saying the country needs an apology for the deaths and urged the government to recognize that “mistakes have been made that must be corrected.”

Garcia said the situation could not wait until April 2024, when elections have been proposed, two years earlier than required.

The crisis has touched tourist hub Cusco, which again closed its airport on Thursday, and the country’s key mining sector, which saw a large copper mine struck by attackers and a tin mine shuttered in solidarity for the dead.

Prime Minister Alberto Otarola said earlier on Thursday that Boluarte would not resign, citing constitutional requirements to consolidate the succession, “not because she does not want to.”

“Leaving the presidency would open a very dangerous floodgate for anarchy and misrule,” he said.

Peru’s top prosecutor’s office on Tuesday launched an inquiry against Boluarte and some top ministers. The same day, Peru’s Congress – which fiercely opposed leftist former leader Castillo – passed a vote of confidence in the new government.