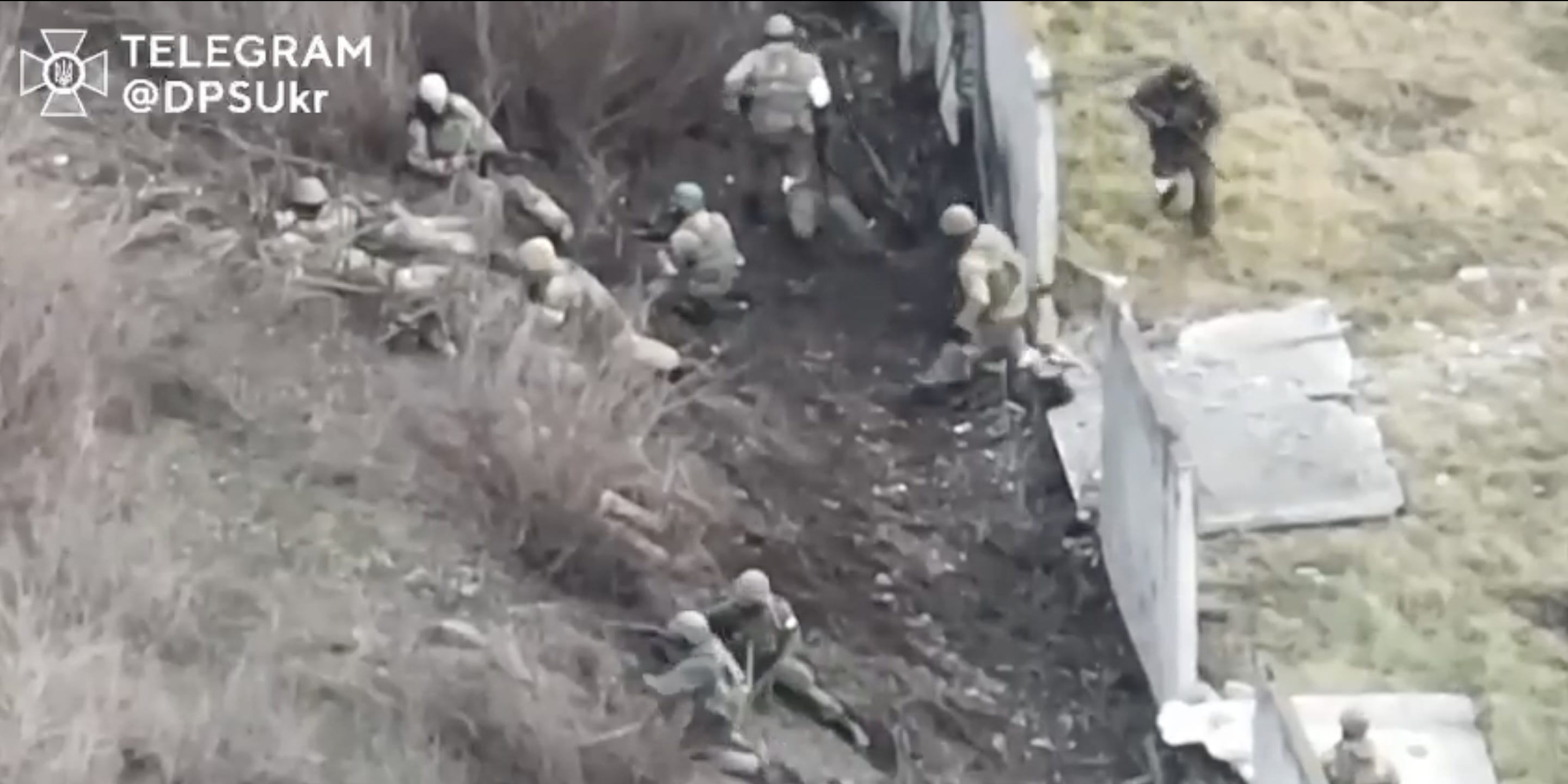 Footage of Russian soldiers in a crossfire with Ukrainian forces.

Drone footage posted on the State Border Service of Ukraine’s Telegram shows the Ukrainian military winning a firefight against the infamous Wagner Group.

The Wagner Group is a private army with close links to the Kremlin that has been at the forefront of the bitter battle for Soledar in eastern Ukraine. It has conscripted many of its fighters from Russia’s prison system.

The video shows soldiers — who the State Border Service of Ukraine identified as Wagner Group fighters — being monitored by a drone.

The soldiers then come under fire from Ukrainian fighters using large-caliber machine guns, resulting in a number of injuries, according to the border force.

The video ends after a series of Ukrainian artillery shells explode among the Russian unit, and the unit’s men appear to be lying immobile on the ground.

In a Telegram post, the State Border Service of Ukraine described the events.

“In Soledar, we explosively meet the Wagnerites. At the beginning of January, the border guards, together with the units of one of the mechanized brigades of the Armed Forces of Ukraine, held back the enemy offensive. Our aerial reconnaissance detected a group of enemy infantry.

Approaching the positions of our defenders, the Wagnerites came under a favorable crossfire. Large-caliber machine guns inflicted casualties on the enemy. The defeat of the occupiers in this direction was completed by a well-hit artillery strike, which was also corrected by the border ‘bird.’ Effective aerial reconnaissance is the key to success on the battlefield.”

Insider has been unable to independently verify the footage.

Fighting in the salt-mine town of Soledar, in the Donetsk region, has intensified recently, with Russian troops — including the Wagner Group — making tactical advances and now controlling most of the settlement, according to the UK Ministry of Defence.

On Friday, Moscow said it had finally captured Soledar. But Ukraine officials disputed the claim and called it  “information noise,” reported the BBC.

Speaking during his nightly address from Kyiv on Friday, Ukrainian President Volodymyr Zelenskyy said: “The tough battle for Donetsk region continues, the battle for Bakhmut and Soledar, for Kreminna, for other towns and villages in the east of our country continues.

“Although the enemy has concentrated its greatest forces in this direction, our troops – the Armed Forces of Ukraine, all defense and security forces – are defending the state.”